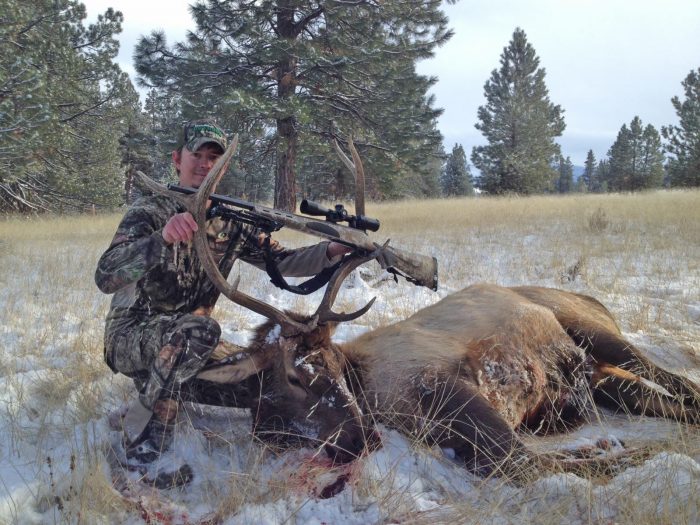 Are you ready for hunting season? Montana Fish, Wildlife & Parks can help. In addition to the following hunting forecast, FWP’s provides online information about hunting access, including our popular Block Management Program. Through the program, we coordinate with landowners to provide hunting access to more than 7 million acres of private land.

The interactive Hunt Planner map allows users to look at information for various species, including hunting districts and regulations. The hunt planner interactive map is a great way to access our block management information, so if you’re planning a hunt in a certain area, you can see if there are Block Management Areas available to expand your opportunity.

And, as always, you can contact our helpful staff at any of our regional offices around the state. They’re happy to help and can often get you pointed in the right direction with just a few simple tips.

Montana has some of the longest hunting seasons in the West, healthy herds of game and access to millions of acres of public land. However, hunters must be mindful of fire danger and of private landowners who are facing grass shortages, poor crop production and fatigue from monitoring for fire. Hunter harvest helps to reduce wildlife densities on a stressed landscape, and perhaps to help lessen winter depredation on hay stacks or winter range.

Here are a few things hunters can do to show respect for private landowners during this dry season:

The badlands, farmland and rolling prairie of southeast Montana are home to a vast number of animals, including strong populations of mule and white-tailed deer, variable antelope numbers and a growing number of elk.

Mule deer in the region recovered rapidly from their low point in 2012, and since 2016 remain at one of the higher densities seen in southeastern Montana since current surveys were initiated in the 1980s. Following back-to-back severe winters in 2009-10 and 2010-11, mule deer numbers bottomed out at 61 percent of long-term average. Spring 2018 surveys indicate populations are 29 percent above long-term average.

“The age structure of the population continues to improve,” Foster said. “Early in that recovery, the population was heavily skewed toward younger age classes; we had lots of yearlings, lots of 2-year-olds, but fewer mature deer. That’s perfectly natural. It’s a result of the boom in production following the population decline.”

Going into the 2018 hunting season, biologists expect that there will be strong cohorts of 3- to 5-year-old bucks on the landscape. Deer in the 6- to 8-year-old range will still be relatively few and far between, as these age classes would have survived as fawns or been born following the severe winters when fawn production and survival rates were low. The number of 5-year-olds this year should be modest, as they would have been born in 2013, a year with healthy fawn production but fairly low numbers of deer. Numbers of 3- and 4-year-olds will be better, and there will once again be high numbers of yearlings and 2-year-olds. Buck numbers as a whole are phenomenal; the region-wide average was 46 bucks:100 does following the 2017 hunting season.

“We are still at a high point for deer numbers,” Foster said. “At 29 percent above the long-term average, habitat degradation is already beginning to occur. The drought last year means that deer entered winter with fewer fat reserves than prior years. Huge numbers of mouths on the landscape means that it will be more difficult for deer to find good winter browse and thermal cover.”

Habitat is important, and high numbers of deer can have an effect.

“Deer can and do have the ability to eat themselves out of house and home,” said John Ensign, FWP Region 7 wildlife manager. “When deer numbers are high like they are right now, they impact winter browse. As that browse component declines, so does the number of deer that the landscape can support.”

“It’s counterintuitive,” Foster said. “But the best thing that we can do oftentimes to improve deer numbers is to harvest more deer.”

Good harvests can mean better deer health through the winter and into spring because the habitat can better handle the pressure. This often equates to higher adult survival, as well as increased production, health and survival of fawns born the following spring.

“The antlerless mule deer quota has been at 11,000 since 2017, which means there’s plenty of opportunity for hunters to fill their freezers while helping to maintain herd health,” Ensign said.

Whitetail numbers have held steady in southeast Montana. Epizootic Hemorrhagic Disease (EHD) outbreaks have been localized in scale and small in magnitude since 2012. Local hunters will recall the last major EHD outbreak in 2011, which caused heavy mortality in whitetails throughout many parts of Region 7.

“We are at a good place right now with whitetail numbers,” Ensign said. “As deer densities increase, the risk of major EHD outbreaks increases. The disease is transmitted by a biting midge. When you get deer in close proximity, it’s an ideal situation for disease transmission.”

“It’s impossible to stockpile wildlife, including whitetails,” he said. “Whether in the form of disease, drought or harsh winters, Mother Nature always intervenes.”

Hunters who do their homework by scouting and visiting with private landowners should have success locating good areas to hunt whitetails.

“The message here is that the extra windshield time to reach the southeast corner of Region 7 is absolutely worth it,” Foster said. “Hunters will find better densities and good public land opportunity in this remote portion of Region 7.”

Summer production surveys indicate that southeast Montana antelope numbers have increased 89 percent from the low in 2012 to a recent peak in 2016 and have since leveled off.  Despite a drought last year followed by a tough winter, fawn recruitment was robust this summer. Buck ratios are also strong at 59 bucks:100 does prior to this hunting season.

FWP is offering more either-sex rifle licenses than in the previous few years, allowing more sportsmen to enjoy the opportunity provided by the current strong buck numbers. Doe-fawn licenses remain relatively low at 1,500, where they have been since 2016. Again, those wishing to harvest an antelope in Region 7, especially a doe or fawn, will have the greatest opportunity in the southern portion of the region.

These are good times for elk hunters as Montana elk populations continue to be strong across most of the state. In many hunting districts, however, access to private lands can be difficult, which can affect hunting success given landownership patterns and distribution of elk.

Even if you didn’t draw a special permit this year, remember that Montana offers numerous opportunities to hunt for elk with just a general hunting license.

The most recent winter surveys indicated that elk in southeast Montana are continuing moderate growth and gradual expansion into unoccupied available habitat. FWP biologists observed strong calf recruitment (53 per 100 cows) and an excellent composition of bulls (43 per 100 cows).

The Missouri Breaks (Hunting District 700) and Custer Forest Elk Management Unit (HDs 702, 704, 705) remain the two “core” elk populations. Outside of these areas, elk numbers across the region are low, distribution is spotty and elk are primarily found on private land where public hunting access is limited.

New as of the 2016 hunting season is the 007-00 B license. This license is valid for antlerless elk throughout Region 7. During the archery-only season it is valid on all land types, and during general rifle season it can be used on all lands except for the Charles M. Russell National Wildlife Refuge and the Custer National Forest.

Beginning in 2018, the general elk license will now be valid for spike bull or antlerless elk in HDs 702, 704 and 705. Previously it was only valid for antlerless elk. This change provides more opportunity for sportsmen, reduces accidental harvest of spike bulls, and is not expected to have a measurable impact on bull numbers. See regulations to determine which lands the general elk license is valid for during the archery and general seasons.

Additional antlerless opportunities exist in the region via a general and/or B-license, and hunters are encouraged to review the regulations for more details on those opportunities. It is important for hunters to note that there are no elk shoulder seasons in any of the hunting districts in Region 7.