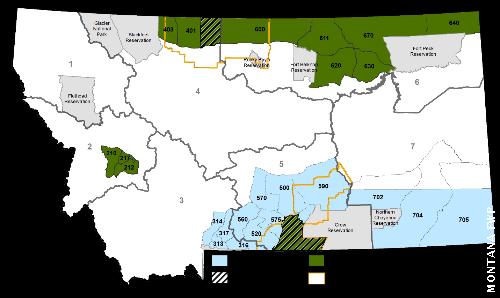 Last year, CWD was discovered in deer south of Billings and north of Chester. This contagious neurological disease infects deer, elk and moose. It is always fatal and there is no known cure.

CWD is not known to infect humans, but it is strongly recommended that humans not eat meat from infected animals.

Because of the discovery of CWD, Montana Fish, Wildlife and Parks has established CWD positive areas and transport restriction zones in both parts of the state where the disease was found.

In addition to the CWD positive areas, FWP established broader transport restriction zones (TRZ) to help prevent the spread of the disease. A TRZ is one or more counties, or portions of counties, that contain a CWD positive area.

To prevent the spread of CWD, no brain or spinal column material from animals taken in the CWD positive area are allowed outside the TRZ.

The boundaries of the TRZ were established so that hunters have access to game processors, taxidermists and landfills for processing and disposing of animals taken in the CWD positive area. The spinal column may be left in the field at the kill site.

In 2018, FWP will conduct CWD surveillance in high-priority areas in parts of northern, western and southern Montana, primarily from hunter-harvested animals killed in the priority surveillance areas. This surveillance begins with the start of general big game season Oct. 20. However, archery hunters who harvest animals within the surveillance area prior to Oct. 20 can have their animal tested at an FWP office.

Hunters who harvest animals outside the priority surveillance areas can sample their own animals and submit them for testing by following the instructions found at fwp.mt.gov/CWD.

For more information on FWP’s CWD surveillance efforts, go to fwp.mt.gov and click on “CWD”.