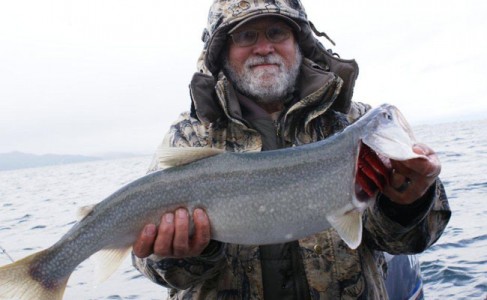 Anglers are coming up on the half way mark of the 2018 Fall Mack Days Fishing Event on Flathead Lake. A total of 5,297 lake trout entries have been turned in over the first three weekends. Battling windy weather and rolling waves has hampered the numbers in this event. Ninety two anglers out of the four hundred and two entered have entered tickets in the drawing. There are several ways to win. Go to www.mackdays.com for information or telephone 406-883-2888 ex 7294 or 7282 or call 406-270-3386.

There is UP TO $150,000 in CASH and PRIZES sponsored by the Confederated Salish and Kootenai Tribes that will be available to anglers who turn in at least one entry/lake trout at the end of the eight week-long event. Entry forms will be taken until the last day of the event on November 11th. One ticket gets you entered in the lottery style drawing that begins at $1,000 and goes to $500.

Anglers put in many hours to get the high numbers of entries. Ladies are out there with the men fishing from daylight to dark many days in all kinds of weather. Several different methods are being used-jigging, trolling, casting-bait and no bait-you have to try it all. Dock anglers are catching also. Some are using bait and some are casting.

Julie Perkins of Kalispell leads the Ladies with a total of 133, 2nd Laurie Kreis of Huson-87, 3rd-Kimberly Mack of Helena with 70, 4th Gina Schiff of Whitefish with 51, and 5th Jeanee Mooney of Missoula with 49.

Mike Benson of Lonepine is first in the Top Ten Category with 374, 2nd Felix Gauci of Stevensville-349, 3rd-David McDaniel of Polson-319, 4th-Scott Bombard-Missoula-275, 5th-Sam Cusker-Whitefish-230, Terry Krogstad of Kalispell is 6th with 156, Larry Karper of Florence is 7th with 152, Richard Kreis of Huson is 8th with 140, 9th is lady angler Julie Perkins of Kalispell, and 10th Bob Christensen of Missoula with 126.

Felix Gauci of Florence turned in two small lake trout over the weekend to take over that category. His lake trout entries were 159mm and 156mm-2.5”.

There has not been an entry for the largest lake trout over 36” and over 24#’s.

Mack Days are used as a tool to reduce the non-native lake trout in Flathead Lake and increase the numbers of native bull trout and westslope cutthroat trout. There are two events per year spring and fall. Check it out-all it takes is one fish to win!