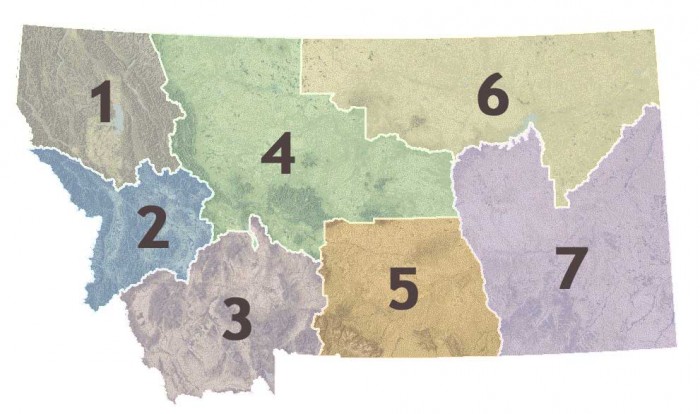 Montana’s 2018 general big-game season opened Oct. 20 and will run through the weekend after Thanksgiving.

Here are some specifics from the second week of operations at FWP’s weekend check station in south central Montana:

At the Columbus check station, FWP wildlife biologist Shawn Stewart measured the smallest number of hunters on record for the second weekend of the general big-game seasons. The deer harvest was the second lowest on record. For hunters who ventured out, however, the harvest success was exactly at the long-term average.

Stewart said hunters reported seeing fewer deer than in the past, though localized areas appeared to have significant numbers of deer on private land.

The number of hunters who stopped at FWP’s Lavina check station was off sharply from a year ago, but those who went to the field harvested a number of animals similar to the second weekend in 2017. FWP wildlife biologist Ashley Taylor checked 153 hunters, down from 205 during the same weekend of the 2017 season. Those hunters had harvested six white-tailed deer – two more than last year – and 10 mule deer – the same as in 2017. The reported elk harvest of 14 animals was down from 17 a year ago. Of those who stopped, 20 percent had harvested animals compared to 19 during the same weekend last year.

For the first two weeks of the year, the number of checked white-tailed deer was down 73 percent from the long-term average and the mule deer count was 43 percent below average. The elk numbers reported at Lavina were up 50 percent from average.

Traffic at FWP’s Big Timber check station remained slow for a second weekend, but still was close to normal. FWP wildlife biologist Justin Paugh checked 143 hunters, down just two from the same weekend in 2017. The reported white-tailed deer harvest of 14 animals was eight more than in 2017, but below the long-term average of 17. Just 10 mule deer were checked, down from 28 a year ago and below the average of 25. Hunters checked 15 elk – a record high for the second weekend of the season. That number was up one from the same weekend in 2017 and more than double the long-term average of eight.

Of those hunters who stopped at Big Timber, 36 percent had harvested an animal compared to 39 percent a year ago and well below the long-term average of 50 percent.

FWP’s Laurel check station provided the exception to down-trends seen elsewhere in south central Montana. FWP wildlife research specialist Jay Watson checked 102 hunters, up from 93 on the same weekend last year. Those hunters had harvested 11 white-tailed deer – up two from last year – and 14 mule deer – just one shy of the same weekend in 2017. Hunters also checked two elk as compared to a single animal last year.  Of those who stopped, 26 had harvested game compared to 27 during the second weekend of the 2017 season.

The statistics gathered at Laurel still lag behind the 20-year average in the categories of numbers of hunters, deer harvested and percentage of hunters with harvested game. The two-week elk harvest was right at the average of six.

Sixteen bird hunters, most pursuing waterfowl, also stopped at the Laurel check station with more harvested birds than average for this time of year.

The number of hunters who stopped at the check station at the east end of Main Street in Billings Heights was down sharply from the same weekend last year. FWP wildlife biologist Megan O’Reilly checked 241 hunters, down from 357 in 2017. Of those who stopped, 28 percent had harvested an animal compare to 32 percent during the same weekend last year.

While the number of harvested white-tailed deer was double last year’s count, hunters checked only half as many mule deer. Hunters with six white-tailed deer stopped at the check station, up from just three a year ago. Hunters had harvested 36 mule deer, down from 72 in 2017. The elk harvest, as measured at Billings, was down to 17 for the weekend compared to 27 for the same time in 2017.

Biologists reminded hunters that FWP continues to monitor eastern Carbon County and northern Liberty County for chronic wasting disease. Special transportation restrictions apply to any deer, elk or moose harvested in that area. Specifics about the disease, maps and restrictions are in the printed hunting regulations as well as on the FWP website, http://fwp.mt.gov/cwd.