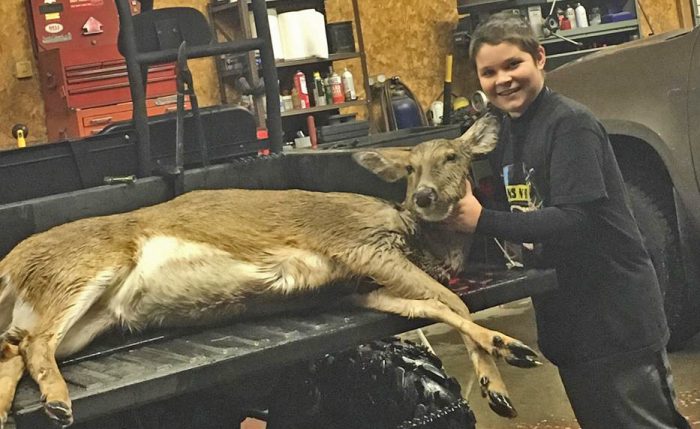 First Deer Harvested by 11 Year-old Results in Permagrin!
By angelamontana

We know this is the Montana Outdoor Radio Show, but we like to celebrate our friends and relatives in other states, too.  So, here is a SUPER HUGE congratulations to Lawsen Simmons, also kind of Angela Montana’s cousin, for his recent, and first, successful deer hunt.

Eleven year-old Lawsen Simmons, son of Tia Simmons and Kyle Farley, is no stranger to hunting, as he is an avid small game (squirrels and rabbits) hunter in northwest Michigan, where he lives.  Lawsen has been hunting with his “Pa”, Tim Farley, since he was two years-old and has learned just about everything he knows from gun safety to ethical hunting from his Pa.  As a matter of fact, it has become tradition for the two to hunt together every year.  Lawsen recently went out on one of their annual hunting trips and tagged his very first deer–a nice doe!

Lawsen dropped the doe in her tracks at 90 yards on the private property they were hunting with a .243 Savage.  This is a BIG deal for this small game hunter, as his hunting world has officially expanded!  He wants to also do his part in conservation by hunting coyotes.  Way to go, Lawsen!

Lawsen kept the hoof with his tag on it along with the shell casing as a special reminder of his first successful deer hunt.  According to his mother, Lawsen has been smiling since the infamous hunting trip.

Way to go, Mom, Dad and Pa for being so supportive of this young hunter, and it’s always awesome to see youth hunters with good mentors.