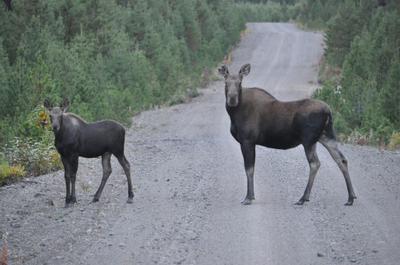 Moose Reported in Rattlesnake Area; Residents and Walkers Urged to use Caution
By angelamontana

A cow and calf moose have been reported in several parks in Missoula’s Rattlesnake neighborhood over the past week, and people are urged to use extra caution. Missoula City and County have posted cautionary signs in several locations, and the dirt surface trails in the north end of Greenough Park are temporarily closed for public safety and to give the moose some undisturbed space.

Montana Fish, Wildlife and Parks (FWP) says that the moose pair have been spotted in Greenough, Pineview and Tom Green Parks, as well as many spots in between.  Moose and other animals often travel on the same trails as people this time of year, where snow depth is less, increasing the chances of a surprise encounter.

Residents, walkers and dog owners should be alert and keep dogs on a leash or consider alternative areas. If you do spot a moose, stop and give it plenty of space.

Dogs are already required to be on-leash in Greenough Park, and the City of Missoula strongly encourages citizens to observe the City’s leash laws when exercising in the greater Rattlesnake Greenbelt area.

FWP is monitoring the situation closely and may attempt to haze the moose into more remote locations if possible.

At this time of year, moose, elk and deer are spending more time in the valley bottoms where they can avoid deeper snow and access more forage.  These extra concentrations of wildlife due to snow and cold should subside over the next month.