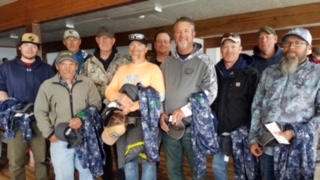 The 2019 Spring Mack Days Fishing Event sponsored by the Confederated Salish and Kootenai Tribes and sanctioned by Montana Fish Wildlife and Parks concluded May 19th with awards and a fish fry at the Blue Bay Campground. A record total of 40,357 lake trout entries caught by two hundred twenty anglers were received over the fifty-one days of the event. Anglers could fish Tuesdays through Sundays during the nine week-long fishing event or they could choose to fish only one day. Mack Days was a week late beginning on March 22nd instead of the 15th because of boat ramps being frozen in and it ended a week late on the 19th of May. The previous high number of 38,085 entries was from the 2012 Spring Event when three hundred thirty anglers caught one or more lake trout.  The 2018 Event had 36,318 entries and 2017 had a total of 37,195.

Kalispell angler Jason Mahlen blazed through the event with a record total of 2,134 (2018 his total was 2,028 and was the number to beat) lake trout entries and a perfect record setting 100 fifteen day average. Friday was a rough day on the water and he missed the 100 on that disappointing day turning in fifty five entries which for most anglers would be a great day. But when you are trying for a perfect day and know you have only one day left to achieve your mark it would be frustrating. Saturday was a milder day on the water and Jason finished and turned in early with his last perfect one hundred fish day to finish out the event. He commented he did not realize how important it was to him until he finally was done and had the last lake trout in the net and in the cooler. Kolton Turner of Kalispell came in 2nd with 1,822 and 91.8, 3rd David McDaniel of Polson-1,680 and 79.33, 4th Bob Turner of Kalispell-1,490 and 77.47, 5th Mike Benson of Lonepine-1,381 and 70.06, Ken Varga of Kalispell was 6th with 1,108 and 64.26, Jerry Benson of Plains 7th with 1,126 and 63.8, Felix Gauci of Stevensville 8th -953 and 62.06, 9th Scott Mahlen of Kalispell with 1,142 and 61.93, and in 10th Matt Guckenberg of Kalispell with 1,030 and 57.4. Top ten anglers are placed on their fifteen day average.

Spirit of the Event Awards went to Bob Turner, Kolton Turner, and Tom Kemppainen of Kalispell. They were the three men in a boat who broke a path through the ice on March 22nd at Yellow Bay which gave anglers the opportunity to get out on the water the following day. They spent five and a half hours chipping through the ice to get out to open water. Mack Days would have been set back in fish totals if they had not forged their way out to the open water.

Future expert anglers in the two Youth Categories:  Matt Guckenberg Jr. of Kalispell was 1st in the 13-17 Category with 545. Second went to Emmett Ludahl of Kalispell with 32, 3rd Abby Hodgson of Kalispell with 20, 4th Wyatt Thompson of Bigfork with 5, and John Ross Jr. of Stevensville was 5th with 4. The 12 and Under Category leader was Brodie Smith of Kalispell with 167, Fjord Borgen of Columbia Falls was second with 52, and Fisher Whitaker of Kalispell 3rd with 33.

Heaviest fish under 30 inches on the last day was won by Debby Sacchi of Thompson Falls with a 6 pound lake trout. 2nd place went to Ben Carson of Stevensville with a 4.5 lake trout.

For a list of winners and other information go to www.mackdays.com.

Mack Days are used as a tool to reduce non-native lake trout in Flathead Lake. This is a plan supported by the Confederated Salish and Kootenai Tribes and is used to increase the numbers of native fish for the future generations of the tribe and state of Montana. You cannot see fish like you can see other wildlife. It takes years of work and research to make a difference. 2019 Fall Mack Days will begin on September 20th and will end on November 17th. We will be looking forward to setting more records and seeing new faces join the event.

Thank you to each and every angler who helped to make this event such a success. You make the events what they are.