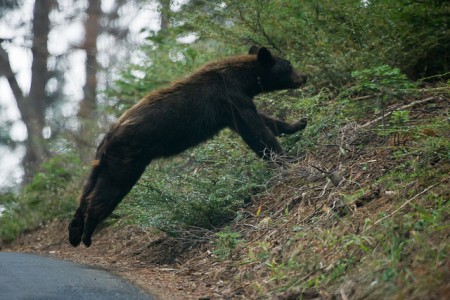 Be bear aware, even in Southeastern Montana
By angelamontana

We don’t often think of Southeastern Montana as bear country, but it is. And just as elsewhere in Montana, people are encouraged to be aware of bears and to play a role in preventing conflicts.

On Memorial Day around 6 p.m., game wardens from Fish, Wildlife & Parks Region 7 responded to a report of a small black bear rummaging in trash outside of a garage on the southern edge of Miles City. The bear fled after FWP arrived, avoiding hazing attempts, but it returned to the area twice more that evening. The final time, it entered the garage in search of trash. It emerged when confronted by the resident and ran to the neighbor’s home, where it was shot by the homeowner.

Wardens were informed of the incident and the bear was removed.

Montana law allows people to kill a bear to defend themselves, another person or a domestic dog. People may be able to avoid this situation, however, with some preventive efforts.

Once a bear finds easy sources of human food, it can become conditioned to favor them over the more difficult to find and less calorie-laden natural bear foods. And a bear seeking human foods is certain to come in conflict sooner or later with people. The most effective way to save Montana’s bears is to remove any attractants that may draw them into close proximity with people.

It is extremely important that people are aware of what attracts bears and do everything possible to secure those items.

-Human garbage. Garbage should be stored where bears can neither smell nor gain access to it, either in a bear-proof container or inside a building.

-Compost. Anything other than grasses and leaves should not be composted outdoors.

-Plants. Avoid plants that attract bears, and use native plant landscaping whenever possible.

-Pet food. Avoid feeding pets outside at dawn or dusk when bears are most active and do not leave their food unattended at any time.

There have been other reports of bears in close proximity to rural residences this season in Region 7, and attractants were also present in those cases.

“It’s not uncommon for bears to travel down river corridors and show up on the edge of a town,” Blundetto said.

With that in mind, residents must remember to take steps to keep encounters from becoming conflicts.