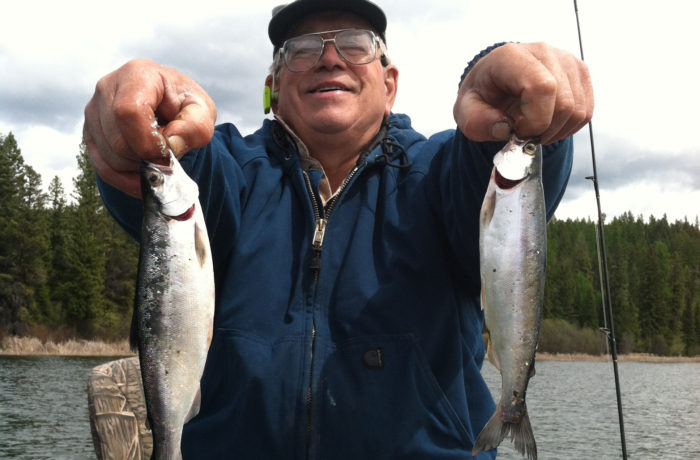 You probably have not heard a consistent salmon report out of Lake Mary Ronan (LMR) lately. We have also been trying to get a consistent fishing report from LMR, but every time we inquired it was, “Fisherman are not talking”, “The fishing is good”, “The fish are bigger than last year”, “this years class of salmon are smaller”, or “Not much luck”.

So, the Captain and Dick Zimmer, from Zimmer Tackle, decided they would try and find out how they would do on Tuesday. They were greeted by great weather with hardly any wind. They started in front of Camp Tuffit in 25 feet of water and didn’t have a bite. After cruising around the lake trying to locate a school of salmon, they decided to anchor in 28 feet of water right out from the Big Tree on the Plum Creek shore line. From that point on, at about 10am, they began catching salmon, mostly in the 10-11 inch range, but they did end up with five really nice 13-14 inch salmon. In all, they caught and released close to 50 salmon including a nice trout and 3 perch!
The popular rig set-up was a number 4 pink swedish pimple with a orange or red glow hook tipped with raw shrimp and red dyed maggots and a touch of Mikes Shrimp oil.  Salmon were biting right on the bottom.