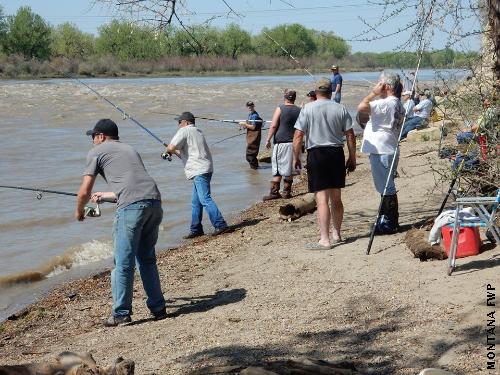 Paddlefish season on Yellowstone, Lower Missouri starts May 15
By angelamontana

The 2019 paddlefishing season on the Yellowstone and Lower Missouri rivers will start on Wednesday, May 15.

Montana Fish, Wildlife & Parks Region 7 Fisheries Manager Mike Backes has no predictions for this season, but he doesn’t expect a fast and furious start based on current river flow projections.

A pulse in river levels typically increases paddlefish migrations, but last season there were such high volumes of water at times – and multiple river pulses due to rain and continuing snowmelt – that fish were much more spread out. As a result, angler participation was also spotty at times, extending the harvest to 15 days before the 1,000-fish harvest target was approached. Compare that to the 2017 season, which was fast and furious and closed in just over three days.

According to 2018 tallies, 714 paddlefish were processed at Intake Fishing Access Site near Glendive, and Backes estimates that another 194 fish were caught elsewhere. That makes for an estimated harvest of 908 fish.

“Approximately one in 10 fish was a small male, potentially from the year 2011,” Backes noted. “Sixty-two fish were reported via the mandatory reporting phone number; of those, 21 had jaw tags, 19 were harvested from the Powder-Yellowstone River confluence, two were from the Tongue-Yellowstone River confluence, and only one was reported from the Missouri River. One tag return came from a fish tagged on the Missouri River upstream of Fort Peck Reservoir.”

FWP reminds anglers that anyone harvesting a paddlefish in Montana is required to report it within 48 hours. This is true even if anglers process their own fish. People can meet this requirement by reporting to the processing station at Intake FAS or by calling 1-877-FWP-WILD (1-877-397-9453) or 406-444-0356 or by visiting fwp.mt.gov and clicking on MyFWP.  The numbers are also found in the 2019 Montana fishing regulations (page 85) as well as in the paddlefish regulations pamphlet (page 1). Please use these numbers, as FWP recently discovered that the call-in numbers listed on some of the small yellow cards given to anglers purchasing tags were incorrect. FWP encourages Upper Missouri River anglers who were unable to report their paddlefish to report using the correct numbers. All harvested paddlefish reported to the on-site locations on the Upper Missouri or through MyFWP have been submitted and these anglers do not need to re-report their fish.

Anglers also should note that paddlefishing (harvest or catch-and-release) is closed in all yellow tag areas, except Intake FAS, on Sunday, Monday and Thursday. Paddlefish harvest days are Tuesday, Wednesday, Friday and Saturday in all yellow tag areas. The season will end June 30 or sooner if the harvest target is approached. For more details, see pages 84-87 of the 2019 fishing regulations.

This year’s Montana paddlefish seasons kicked off on May 1 with the opening of the Upper Missouri River section from Fort Benton downstream to Fort Peck Dam.

Anglers interested in river flows in the Upper Missouri should use the United States Geological Survey website for information, particularly the Landusky gauging station. The direct link for the USGS Landusky web page is http://waterdata.usgs.gov/usa/nwis/uv?site_no=06115200.

Additionally, anglers who did not participate in the tag drawing who want to participate in the snag and release fishery can still purchase an Upper Missouri River Paddlefish Snag and Release License online, at an FWP office, or at any license provider.