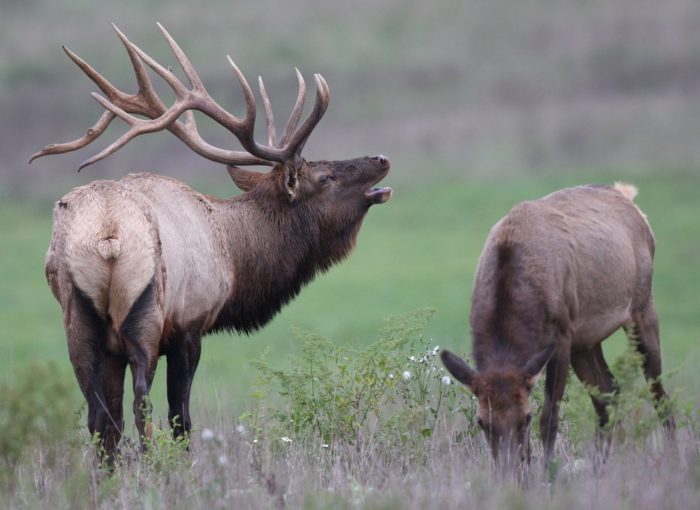 HELENA – The mountain pine beetle infestation in the Elkhorn Mountains, south of Helena, changed the habitat for the elk herd living there, but it is only one component determining elk use on the landscape.

A study released today looked specifically at the impacts of mountain pine beetle on the way elk use their habitat in the Elkhorns. The research also revealed important information about the forage and security cover in beetle-infested forests and raised questions about how elk use private and public land within the Elkhorns mountain range.

The study was completed by Montana Fish, Wildlife & Parks in partnership with the Helena – Lewis and Clark National Forest, Bureau of Land Management, Rocky Mountain Elk Foundation, Montana Department of Military Affairs, Cinnabar Foundation, Montana State University, and the Elkhorns Working Group. The Elkhorns Working Group is a local group of interested citizens that provides collaborative recommendations to the federal and state agencies involved in management of the Elkhorns and its wildlife resource. The group was integral to getting the mountain pine beetle project off the ground. The research study was led by FWP wildlife researcher Kelly Proffitt and involved radio collaring 60 elk (35 cows, 25 bulls) and following their movements over the course of four years.

The GPS-collared elk that used public lands during the archery and rifle hunting seasons selected security areas with a minimum canopy cover of 23 percent and located a minimum of 1.1 miles from motorized routes. The research offered new recommendations for defining security habitat on public lands to provide adequate security for cow and bull elk during the hunting seasons and discourage elk redistributions to private lands.  Similar to many areas in Montana, private land surrounding public land can be a beacon to elk when the hunting pressure increases on public lands. Elk in the Elkhorns are using public land less now then during the 1980s study, which may in part be attributable to the difference in hunting pressure between public and private land and the lack of adequate security on public land.

From an elk standpoint, the Elkhorn Mountains are unique. The Elkhorn Wildlife Management Unit, which comprised a significant portion of the study area, is the only Forest Service wildlife management unit in the country. The mountains are entirely contained within Hunting District (HD) 380, which is managed for larger bulls and is the most difficult elk permit to draw in all of Montana. The HD also has limited opportunities for antlerless elk, and hunters can harvest spike elk with a general elk license. HD 380 was the first hunting district in Montana with this sort of regulation structure. This and HD 380’s proximity to three of Montana’s population centers – Helena, Bozeman and Butte – have led the hunting district to be the most heavily hunted in the state.

Ultimately, elk management in the Elkhorns, like many places in Montana, is complicated, said Mark Deleray, FWP supervisor in Bozeman.