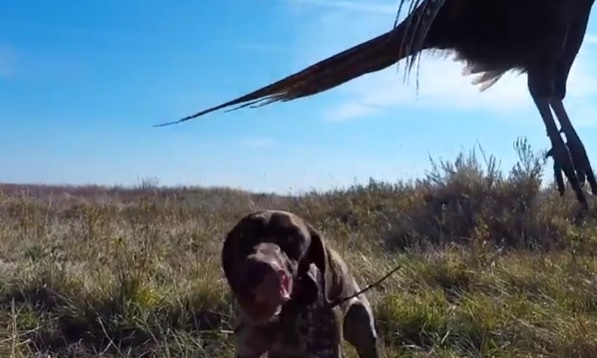 Upland season started Sept. 1 with mountain, sage and sharptail grouse along with partridge. Pheasant hunting starts Oct. 12. All seasons end Jan. 1, except sage grouse, which ends Sept. 30. There was a tremendous bloom of clover this year, which may make walking difficult and distribute birds differently on the landscape.

In south central Montana, hen numbers are likely to be below average due to the cool wet spring and the resulting poor hatch.

In northeast Montana, populations are always spotty. Partridge populations saw similar decreases to pheasants and sharp-tailed grouse due to the drought the last two years. Good nesting and brood-rearing conditions should help them recover slightly this year, and based on brood observations, coveys may be larger than the past two years. In the best habitats the outlook for Huns is fair this year, but hunters will have may need to cover a lot of ground to find those ideal habitats favored by the species.

Hungarian partridge occur throughout southeast Montana, although their distribution also tends to be spotty. For this reason, many of the FWP biologists and wardens refer to them as a “bonus bird,” meaning they can be difficult to exclusively target but can be found while pursuing other species such as pheasants and sharp-tailed grouse. The most robust populations of Huns can typically be found where there is an interspersion of grain, alfalfa and rolling grassy hills or grass ways. Last year the Hun harvest in southeast Montana was estimated to be 20 percent of the 10-year average. Hunters can expect the number of Huns to be below average this fall, but considering the habitat conditions this spring and summer, they could find more birds than last year.

In south central Montana, pheasant counts this spring in the Clarks Fork valley indicated that over-winter survival was not good. Pheasant harvest will likely be somewhat lower this fall than in past years.

Along the Yellowstone and Musselshell valleys, spring pheasant counts were similar to last year and hunting harvest will be decided by how well young-of-the-year survived spring storms.

Pheasant hunting in northeast Montana should improve somewhat over last year but will likely still be below the long-term average that many hunters are used to.  The easternmost counties in the region and areas in the central part of the region along the Milk River are our traditional pheasant strongholds, and all signs point to those being better areas to find pheasants in northeast Montana this fall.

In southeast Montana last year, the pheasant harvest dipped to 47 percent of the 10-year average, which was a result of two years of poor production. Drought conditions in 2017 limited brood survival and resulted in poor nesting cover the following year. Effects of the drought coupled with early summer storms in 2018 and tough winter conditions both years resulted in poor bird numbers last fall. The good news is hunters may observe a modest increase in pheasant numbers this year. Last year’s winter conditions were more conducive for survival. In addition, moisture levels and timing this year have resulted in favorable nesting and brood rearing conditions.

Although early pheasant hatches likely experienced some cold and wet conditions, the peak hatch for pheasants typically occurs around mid-June, which corresponded with more favorable conditions that will likely result in better pheasant production in southeast Montana this year. However, summer storms produced hail that could impact pheasant numbers in localized areas.

This year’s moisture made for a long nesting season, and early-season hunters should expect to encounter broods with young roosters that aren’t colored up yet. On average, pheasant numbers in most places will be a little higher than last year but remain below average due to low production the past two years.

In north central Montana, overall numbers are still below the long-term average, but we are hoping this year is the start of an upward trend for prairie grouse. Expect to see scattered younger family groups early in the season.

This past winter was relatively warm and dry except for the month of February which was thought to have been extremely harsh. Despite the rest of the winter being very mild, the cold snap in February took its toll. Many areas were significantly below the long-term average going to into this year’s nesting season.

April and May were cool and wet.  Precipitation amounts varied but temperatures were below average.  Most places received at least one heavy rain and/or a late snowstorm at the end of April which for many locations was enough to delay nesting effort up to several weeks.

Because of the inclement weather in April, peak hatch was later than average in most areas.  Cooler, rainy weather coupled with short warm spells, however, did create great brood-rearing conditions that lasted well into the summer.  Haying was later than average and light rains have kept things looking good.  Each corner of the region has had an isolated hailstorm or two but nothing devastatingly widespread has been reported.

As we head into fall, perennial cover looks great. Green leafy vegetation will persist into September; and the berry crop in the northern half of the region is looking good. Normal temperatures and good cover suggest birds will be found in their typical areas this fall.

Sharp-tailed grouse in southeast Montana found favorable nesting conditions. In addition to the above-average moisture facilitating vegetation to provide greater security cover during the nesting season, the moisture also increased insect production. This is important because bugs are a critical food source for newly hatched chicks.

Although overall numbers are expected to be below average again this season, biologists and wardens have observed a good number of chicks per brood, indicating strong production. It is anticipated that there will be more birds than last year, but with favorable habitat conditions they could be widely distributed.

In south central Montana, cool, damp weather and hail this spring were tough on the region’s prairie grouse, indicating that harvest opportunity might be somewhat reduced this fall.

Sharp-tailed grouse numbers are likely to be below average due to spring storms and the resulting poor hatch.

In northeast Montana, sage grouse lek counts indicate that populations are still recovering from drought conditions in 2017 that were followed by severe winter weather.  Based on spring survey data, the western portion of the region, including Hill, Blaine, Phillips, and a portion of Choteau counties appear to be slightly below their respective long-term averages, unlike Valley and McCone counties, which are well below their respective long-term averages.  There are no formal surveys of sage grouse in the northeast corner of the region, as there is extremely limited habitat available to support sage grouse. Core sage grouse habitat primarily exists south of Highway 2 and is composed of mixed grass and Wyoming big sagebrush rangeland.

During June there were severe storms that produced large hail that impacted portions of south Phillips county and not only had negative effects on sage brush habitat in the area, but also impacted brood survival.

Sage grouse will be distributed sparsely across the expanses of sage brush but may concentrate in certain areas.

In southeast Montana, the sage grouse spring lek counts were up from 2018 but still below the 10-year average. Sage grouse experienced good nesting conditions across the southeastern portion of the state. The above-average moisture this year has produced a flush of grasses, native forbs and insects, which has been beneficial to not only chicks but also to adults. Sage grouse numbers should remain stable due to the favorable habitat conditions.

In south central Montana, sage grouse counts this past spring were lower than long-term averages and below last year. The storms resulted in poor hatches of chicks.

In south central and west central Montana, mountain grouse fared better than prairie birds this spring. Brood sizes for all mountain grouse species appear to be about average or slightly above, so hunting opportunity likely will be similar to last year.