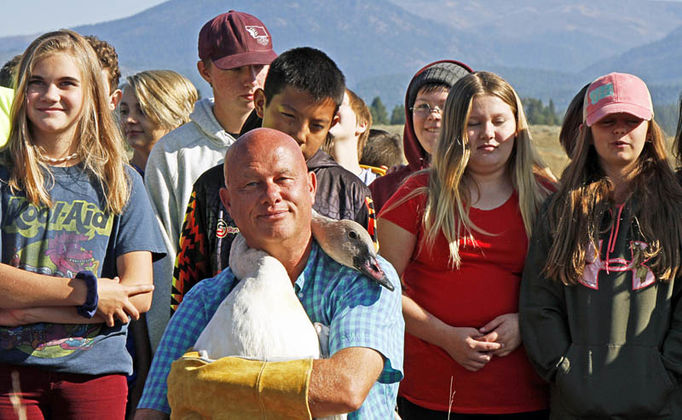 Here’s an article by Betty Vanderwielen via the Seeley Swan Pathfinder: 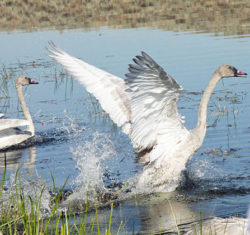 OVANDO – For 15 years, the Blackfoot Challenge and its partners have released fledgling trumpeter swans into the Blackfoot Watershed in a program aimed at restoring the swans to their native habitat. Next year could be the last year that happens. The goal was to get seven pairs of released trumpeter swans to return to the area, create a nest, produce eggs, raise their young and repeat the cycle for two consecutive years. According to U.S. Fish and Wildlife Service Montana State Coordinator Greg Neudecker, that goal has almost been reached. Speaking Sept. 5 on the shore of Rolling Stone Ranch’s Jones Lake to an audience of approximately 150, including children from local area schools, Neudecker said eight nesting pairs have been observed and identified as returnees from previous releases.

Although that sounds like the goal has already been reached, Neudecker explained the swans aren’t considered completely successful until they raise cygnets a second year. Since they bond for life, trumpeter swans take their time forming pair bonds. Some form pair bonds as early as their second winter and may nest for the first time at three years of age, but most don’t nest until they are four to six years old.

In the Blackfoot Watershed, returning swans have chosen nesting grounds in a mix of private and public wetlands stretching from Lincoln to the Clearwater chain of lakes. Neudecker said a pair at Rainy Lake were nesting for the first time on a territory set up last year. An audience member said she observed them tending two cygnets this year. Another pair have set up territory on Seeley Lake, but have not yet nested. Neudecker said Placid Lake harbors the most productive pair. In 2016 and 2017 they had five cygnets each year. In 2018 their nest got flooded out and they produced no young. This year, however, the pair was spotted with six cygnets in tow.

The trumpeter swans released in the Blackfoot are raised from eggs captured by the Wyoming Wetlands Society facility in Jackson, Wyo. About a month before the swans are capable of flying, they are transported to release areas. The five young trumpeter swans released at Jones Lake will spend the month growing their flight feathers and familiarizing themselves with the area. Because they have no adults to model behaviors, they will teach themselves to fly and eventually will migrate to warmer areas when the lakes in the Blackfoot Watershed freeze over.