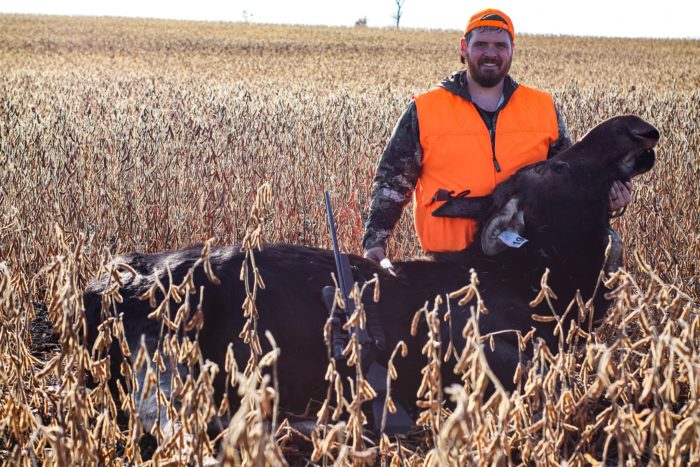 Here’s a hunting story that is from our neighboring state of North Dakota.  Aaron Esquibel lives in Minot and has quite a story about a moose hunt there.  So, if you know anybody who was planning on putting in for that tag and they get it, they can see the experience Aaron had.  Congratulations, Aaron!

Take a look at this:

I’ll be honest. I thought this tag would be easy. I even remember saying the words “this isn’t even a hunt, it’s more of a harvest.” I was wrong, very wrong. Though this hunt wasn’t physically demanding, it wore on me mentally and emotionally.

I’m not sure how many days it took me to finally fill my once-in-a-lifetime North Dakota moose tag. I stopped counting after 12. Instead of days in a tree or miles in the badlands, this hunt was over a thousand miles behind the windshield.

With an unusually wet fall and an unseasonable early October blizzard, most of the cropland in my unit was still up. It is impressive and frustrating how such a large animal can disappear into a standing corn field never to be seen again.

In an area I’ve seen hundreds of moose over the last few years, in 12 days I saw 3.

Yesterday felt different. It was the first nice day in weeks. 30 minutes after sunrise I came across a cow and 2 calves. It was the first real opportunity I had this season. The problem was, they were standing on an inaccessible field covered in “no-tresspassing” signs.

For some reason, after a few minutes , they decided to run across the field, over a prairie trail, and onto a cut field that was open to hunting. This was it! I finally was going to make it happened. I lined up the shot, squeezed the trigger and then nothing. The moose trotted off unscathed. I missed high.

I was devastated. After all this time, I finally had my shot and I missed.

There was only one thing I could do, get back in the truck and keep looking.

8 hours and 250 miles later, I was feeling pretty discouraged. I was starting to feel like I was driving around just because I should, not because I actually expected to find an animal.

I couldn’t believe it. After days of seeing nothing, today I was getting 2 chances.

I drove to the corner of the property to make sure it was accessible, and there it was “Posted”. After looking at the sign and realizing there was no name or number, I saw another opportunity slipping away. OnX maps gave me a name, but I couldn’t for the life of me find the land owners number.

About this time a couple of trucks of pheasant hunters made their way to where I was. They asked me if I’d found any birds. When they found out I was moose hunting, they were quick to point out the big bull in the slough. One guy in the truck asked if I knew who owned the property. I told him the name, but that I hadn’t been able to find the number.

Then he said the best thing I could have heard at the time. “I know that guy.”.

In the time it took for him to call the land owner, we noticed two more dark figures standing in the trees surrounding an old farmstead. It was two more cows, and one was GIANT.

The phonecall ended with a “green light” and a “go get her!”

All at once it hit me and my nerves started to ramp up. I’d been hunting for so long that I just couldn’t blow it again.

I drove up to the abandoned farmyard and began to plan my stalk. I decided to sneak downwind and use some grain bins as cover.

The approach was almost over before it began when a group of pheasants flushed out of the trees next to the grain bin. The racket got the cow’s attention and I though there was no chance they weren’t going to run.

But to my surprise, when I came around the corner they were standing there, quartering slightly away at 75 yards.

I raised my rifle, centered the crosshair and squeezed the trigger. It was a solid hit. She took a few steps forward and right when I thought she was going to go down, she started to trot into the field.

I ran to the edge of the trees, racked another shell, aimed and with one more shot, she dropped.

I had done it, finally after days of hunting, I made it happen, and with what I thought was a clean kill. Again, I was wrong. I was filled with excitement as I approached the downed cow in the field, but that emotion quickly changed as I got closer and realized she wasn’t dead and that she was looking right at me. I didn’t know what had happened the shot seemed perfect, but that didn’t matter right now.

I grabbed my rifle, aimed at the back of her neck and, one last time, squeezed the trigger.

That shot did it. She fell to her side and was taking her last few breaths. I bawled. After all that time, the end didn’t happen the way I planned at all. I ran next to her, put my hand on her side and kept it there until she stopped breathing. I broke off the end of a soybean plant and placed it into her mouth as a “last meal”. I don’t know why I responded this way. Honestly, I’ve never had an experience like this before. I just did what felt right at the time.

I had never felt as much emotion after a hunt. It wrecked me knowing that my kill wasnt fast. I thought it must have been a bad shot, but that wasn’t the case. While cleaning the moose we saw that my first shot hit both lungs and was next to perfect, she was just tough.

This hunt was emotional for me. I felt excitement, nervousness, remorse, sadness, happiness, pride and thankfulness all within a half of an hour.

To make things better, my wife, sons and great friends joined me in the field to get her quartered and carried out. It was a hunt I’ll never forget. 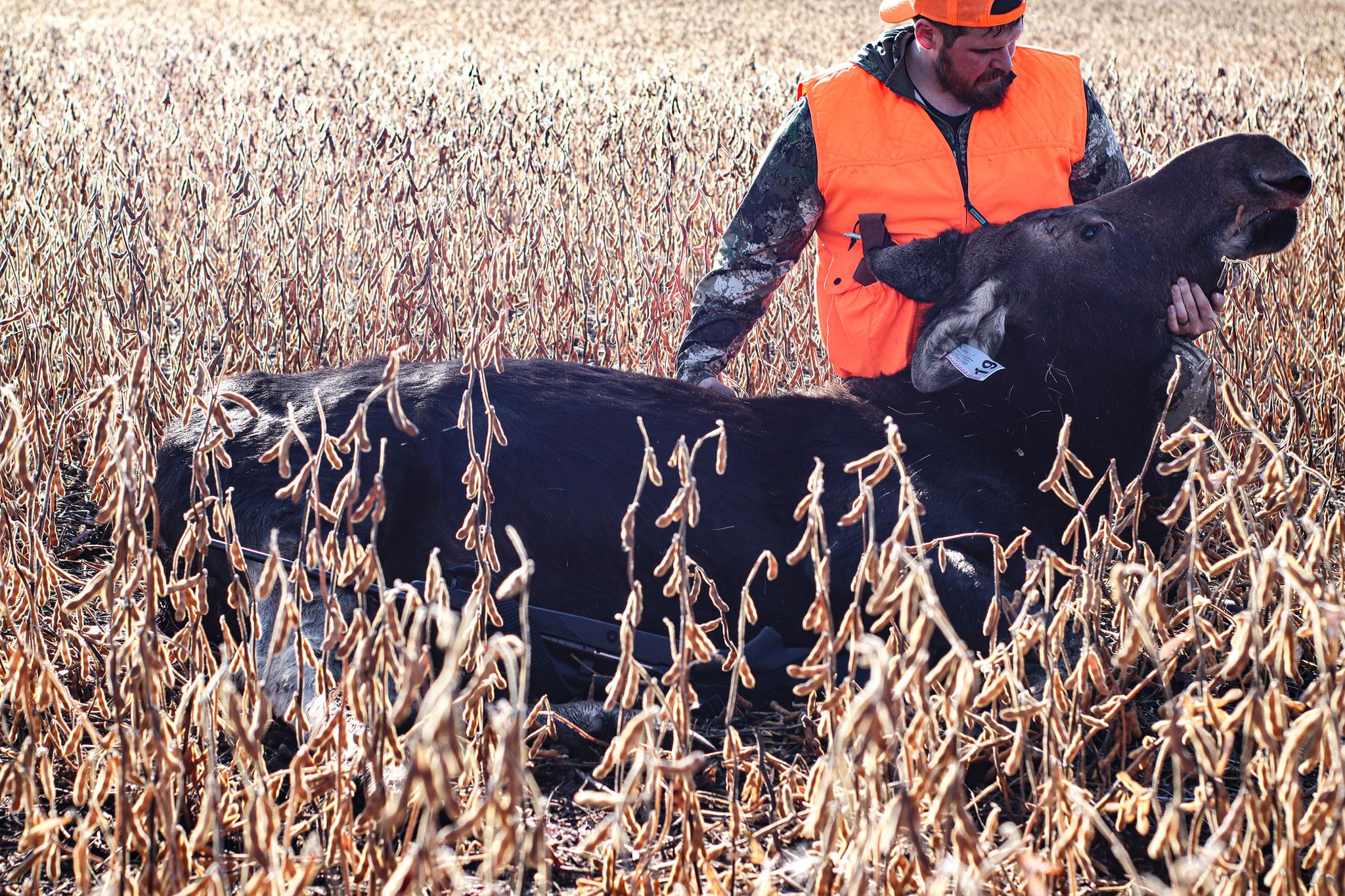 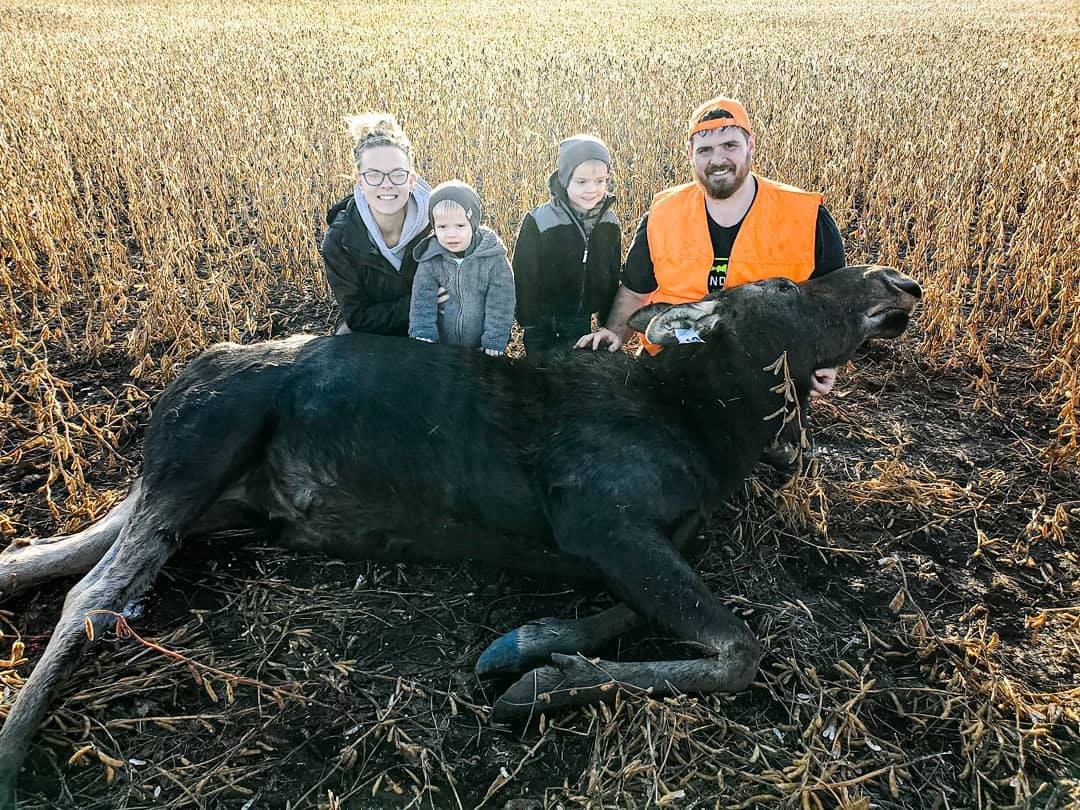 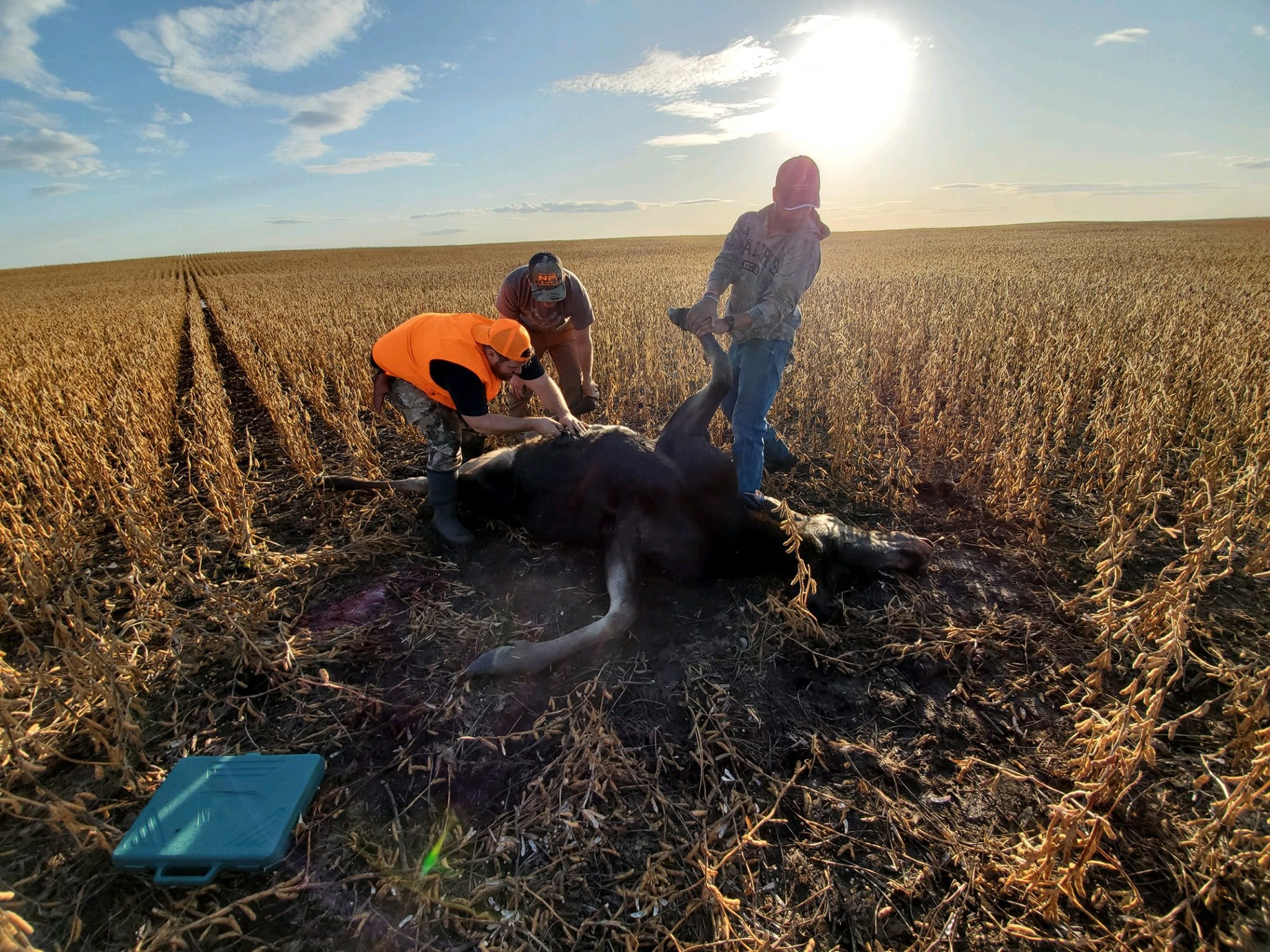 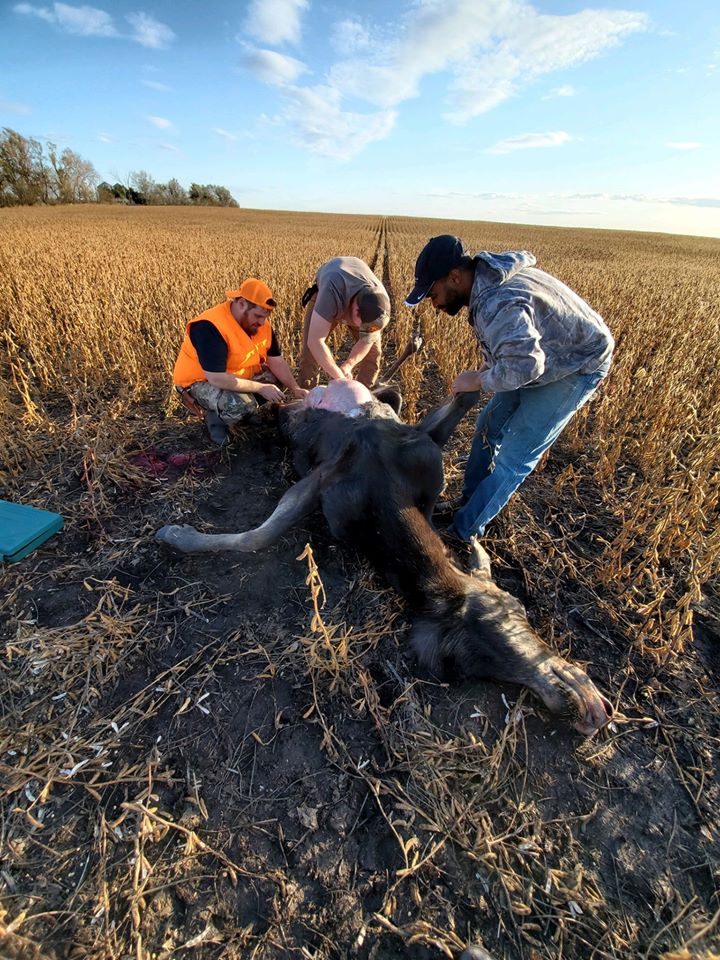 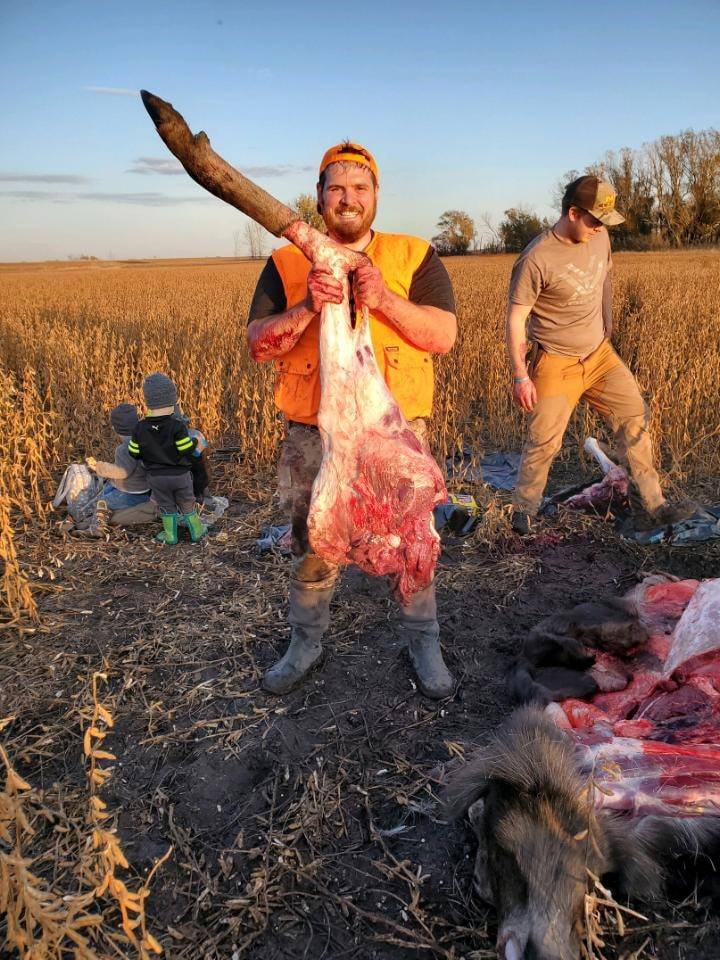