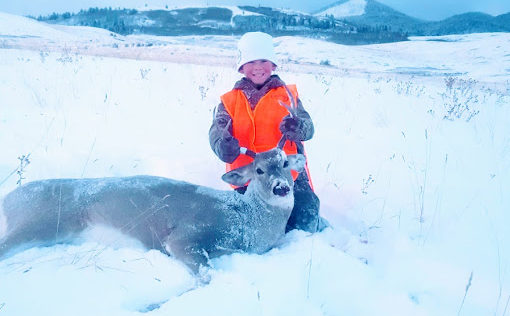 First Deer for this 10 Year-old!
By angelamontana

This is my 10 year old son, Quade Schnabel. He has worked hard to get to this point and is now a successful hunter. Quade has dyslexia. He joined Gallatin Valley Sharpshooters a couple of years ago. Quade wanted to go through the education side of the program to prepare himself for Montana Hunter Safety Test, since he was worried about the written portion of it. GVSS prepared him well under the Daisy National BB Gun curriculum.

It was a cold snowy morning and after hunting hard for a few days, we were caught in the open at shooting light. Luckily the wind hadn’t forsaken us yet. A dozen or so does were moving toward us over the grassy hills after getting their fill in the alfalfa. With no where to hide or go, we dropped to our bellies, with one belly substantially larger than the other’s.

Quade’s Savage .243 had its bipod down. The first doe crested the nearest hill, and he asked if she was OK. I said, “Oh just wait a second, the buck will be coming…” He did at fifty or so yards. I had seen Quade shoot at State BB gun and practice with his rifle.

The buck was a frontal shot. The deer had us pegged and had just about had enough, I told him to put the crosshairs on his chest and squeeze the trigger. Just like that it was over and we had another hunter in the house. This is the best part, when he tells his story, he says, “I just wanted to shoot the doe and Dad said just to wait a second,  the buck will be coming, and he did!”, the way he tells it, it’s like he was hunting with Jim Zumbo.

If I get to feel like that, I guess that’s what the mentor program in Montana was meant for. Now if I could just keep replicating these events….