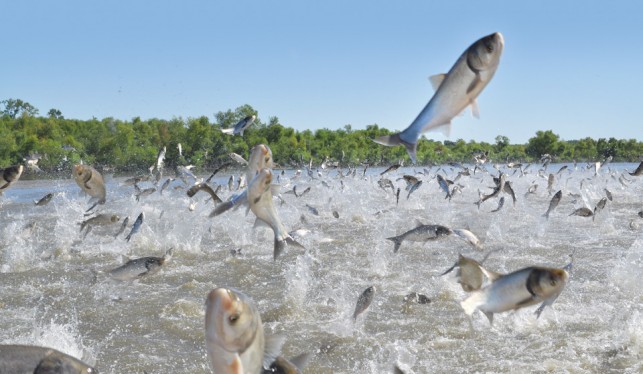 Bighead and Asian Silver carp populations are continuing to grow and expand. We have all seen the videos of these fish leaping from the water and whacking fishermen, boaters, and water skiers in the head. It may be funny to watch but these non-native invasive fish need to be gone!

Originally, they are believed to have from flooded ponds along the southern Mississippi River. The ponds were used to raise these fish for food and the Asian seafood market. When the nursery ponds flooded, the carp escaped, and they are migrating up the Mississippi River watershed. Keeping them out of the Great Lakes has become a huge challenge. The Missouri River is also threatened.

Poisons, netting, electric shock, barriers, and many other ideas have been tried but… What would work best is a more “Natural” plan to deal with these invaders.

Researchers at the Illinois Natural History Survey have a better idea. They propose using a natural predator to control the carp. It seems that Largemouth Bass prefer fry of the Bighead and Silver carp over bluegills, shiners, gizzard shad, and other native forage fish.

Bass can more easily catch and consume the carp than other prey fish. The carp fry also form into large schools which allow bass to target them efficiently. It is not known how many bass are needed to control the carp populations.