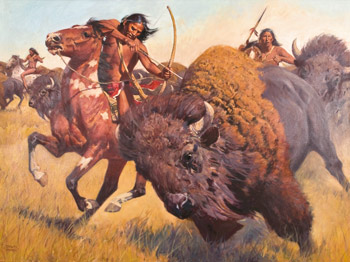 Since this harvest began, in 1985, over 11,596 Bison have been taken by assorted Native Peoples. Yellowstone Park is trying to maintain a healthy population of around 4000 head. Each year, the prolific critters survive to around 5000 animals. Around 1000 need to be captured, harvested, or removed from the Park’s herd.

In recent years some Buffalo have been released onto Tribal Lands. There also plans to transport surplus Bison to public lands, such as the Charles M. Russell National Wildlife Refuge. Before any Bison are transported, they need to quarantine for several months. During that time, they are were tested for Brucellosis, and other diseases. The animals that pass the tests, and quarantine, can then be moved. Any other surplus critters trapped are slaughtered and butchered. The meat is then distributed to Native Tribes.

For generations, a Buffalo hunt was a totally different ritual. Entire tribes would join to harvest what was needed. Todays harvest includes, trucks, wheelers, high powered rifles, and the modern gear that all hunters use.

Wouldn’t it be neat to see the Native Tribes hunt on horseback? Arrows, spears, and lances would be the weapons of choice. A stout pony would carry the hunters into a herd, alongside their quarry. When in close range a well thrown lance would pass through the beasts. Arrows would slow them down. It often took several to seal the deal. Talk about guts and bravery! Most Bison weighed more than the horse and Indian combined. Buffalo Jumps were also used to stampede entire herds over cliffs. Some hunters would also wear animal skins to sneak and stalk their targets. Buffalo were the heart and spirit of many native tribes. The Buffalo was the tribes Mini Mart. Native hunters would wear little, or nothing. Painted ponies and skin were on display. This hunt also weeded out many horses and hunters. Buffalo are strong and dangerous critters. Warriors earned credit and status based on their hunting skills. All the Bison harvested were used and shared by the tribe.

Buffalo need vast areas to live, breed, and migrate. Giant herds once traveled across several states. Todays development, roads, railroads, and growth prevent this. Some groups like the Buffalo Field Campaign, want more protection and freedoms for these amazing creatures. With the open spaces around Yellowstone Park being filled with tourist facilities, homes, and development, this has become nearly impossible.

Farmers and cattlemen fear disease transmission of the Brucellosis virus which causes their cows to abort their calves. Bison also carry this virus, as do elk. At some point, elk may also need more controls. To restore “wild” herds, areas would need to remain “Wild”. This means no development, people, or other uses. Prime real estate today seems to be marked for people purposes.

It would be amazing to see ancient peoples, on horseback, charging into a herd of big brutes, to make their teepees, clothes, food, water carriers, and tools.