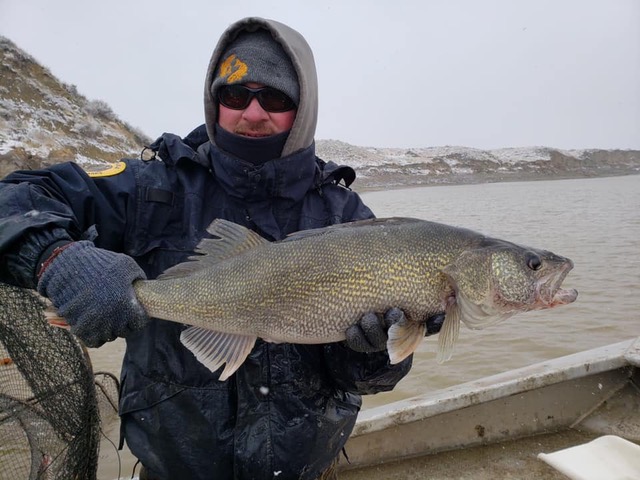 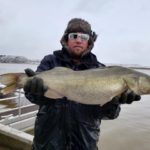 The walleye trap netting and egg-taking operation is officially underway on Fort Peck Reservoir once again.

(As mentioned in a previous post, this year the spawn is being carried out by R6 personnel and without our valued volunteers. Please see the previous post on this page for more information.)

However, apparently Mother Nature isn’t sure what time of year it is. Several days ago, water surface temperatures were approaching 50 degrees in the shallower areas where some our trap nets are located. As of yesterday, water temperatures dropped back down to 35 degrees due to the cold front that moved through the area bringing snow and nighttime lows into the upper teens.

The brief warm spell we experienced last week triggered a few walleye to start cruising the shorelines. As with the beginning of every walleye spawn, male walleye are typically more abundant. That pattern seems to hold true once again. A majority of the walleye captured in the trap nets have been males, but we have captured a few green (not releasing eggs) females as well. Surprisingly, we also managed to pick up a few ripe (releasing eggs) female walleye. These ripe females allowed us to hold two small egg-takes on Friday and Saturday. Stay tuned for more updates on egg numbers and walleye catches.