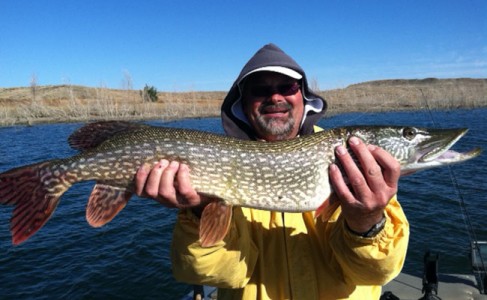 All about Pike!
By angelamontana

The scientific name for pike is Esox lucius, while the common names are: Northern Pike, American Pike, Northern, Great Lakes Pike and jackfish.  According to lakescientist.com, northern pike are confused with muskies on a regular basis, as they are a member of the pike family with similar markings and body shape.  However, to decipher the two fish, you can notice the markings, as muskies typically have dark markings on a light background, and pike typically have light markings on a dark background.

Northern Pike play an important role as predator fish in many water bodies. As voracious eaters, they snap at bait quite readily, making them a favorite among anglers. This appetite, fueled by fish one-third to a half their size, usually drives Northern Pike to become the top predators in many of the lakes they inhabit.

A couple of the few natural predators of mature northern pike are humans and sea lampreys, however, when pike are near the shore in the shallow water, they are more at risk for land-living carnivores.  However, with the lifespan of a pike lasting up to 12 years, they can grow to be very large as long as they avoid being caught and/or eaten.

A couple of facts about pike that you may not have known are:

Northern pike are fun to fish and can get very large and swim very fast, which makes for quite a time if you hook one!

For more information on northern pike from lakescientist.com, click here.