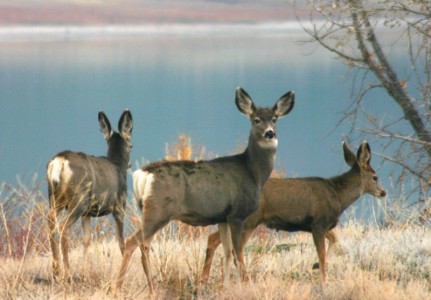 Glasgow — Montana Fish, Wildlife & Parks biologists have completed their 2020 post-season and winter aerial surveys of deer populations across Region 6 in northeastern Montana, along with some spring ground surveys. The surveys indicate above average numbers for mule deer and stable populations of whitetail deer across the region.

For mule deer, 11 trend areas in Region 6 are surveyed two times each year from the air: once after the hunting season and once in early spring. The post-season survey was completed in December and January; however, the spring surveys were not completed due to concerns with the COVID-19 virus and distancing guidelines that are unavoidable in a plane. Instead, ground counts for mule deer were collected by area biologists to estimate of over-winter survival. While total deer counts tend to be variable across Region 6, FWP biologist Ryan Williamson of Outlook said the 2020 surveys indicate mule deer continue to do quite well.

“Region-wide, the fawn numbers continue to do quite well,” Williamson said.  The post season survey showed 61 fawns per 100 adults across the region, which is above the average of 55 fawns per 100 adults. Although the mule deer numbers are variable across the region, there was little difference between the eastern and western portions of the region. Additionally, spring ground classifications of mule deer herds and estimated fawn ratios indicate good over-winter survival.

Data collected during mule deer surveys are only one factor in deer management recommendations. “The prior year’s harvest, weather and habitat factors, as well as additional input gathered from landowners, hunters, the general public and other agencies are all considered by the Fish and Wildlife Commission for season and quota setting decisions,” Williamson explained.

For 2020, the general hunting districts will be managed under the liberal regulation for mule deer, which includes either-sex for a general deer license (A-tag), as well as additional antlerless B-licenses. Hunting district 652 is the only limited-permit district for bucks.

The B-licenses application deadline is June 1 and any surplus B-licenses will go on sale early August. “With liberal numbers of antlerless mule deer B-licenses and the need for hunters to play their role in helping to manage deer numbers, there are plenty of opportunities for hunters to fill their freezers this fall,” says Scott Thompson, Region 6 Wildlife Manager.

White-tailed deer densities tend to be more stable in the eastern part of the region, but winter severity continues to play a role in concentrating deer into the trend areas. “Although the winter surveys were slightly down, the “prairie deer” are still near average and have remained stable in the last decade,” Williamson said. “The western trend areas along the Milk River continue to improve with overall densities now at 7% below average along the Milk River.”

“We feel this level of antlerless white-tailed deer harvest is needed to maintain populations at the current average levels. We don’t want to return to the extremely high numbers of whitetails in some areas of Region 6 that we saw a dozen years ago,” Thompson adds.

“With chronic wasting disease detected in many Region 6 Hunting Districts, more emphasis is put on managing higher concentrations and densities of deer as well as proper disposal of deer carcasses to reduce the threat of spread to other areas of the state,” says Williamson. “Higher deer densities tend to influence the spread of the disease, so we take that into consideration when developing hunting season regulations.” Hunters are encouraged to keep informed on the current CWD regulations for carcass disposal and testing opportunities this fall.