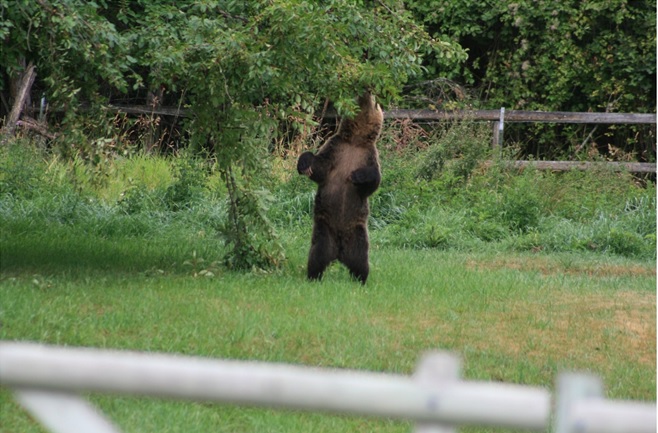 Montana Fish, Wildlife & Parks bear specialists captured an adult female grizzly bear and its three yearlings on private property off Witty Lane. Local residents had reported the bears were getting into bird feeders on porches, eating unsecured chicken feed and killing chickens, and had pushed open a barn door to access pig feed. After talking with the local resident, FWP staff learned the group of bears had previously gotten into bird feeders and pig feed last fall, but the incidents were not reported to FWP.

In accordance with Interagency Grizzly Bear Committee guidelines and in consultation with the U.S. Fish and Wildlife Service, the adult female was euthanized due to food conditioning, which occurs when wildlife lose natural foraging habits.

Prior to capture, one of the yearlings appeared to be limping, and after further review at a local veterinarian clinic it was determined that the bear had a broken bone in its foot. After consultation with the USFWS, the female yearling was euthanized due to its injury.

FWP consulted with the USFWS and National Park Service and moved the other female yearlings to the Logging Creek area in Glacier National Park.

It is important for homeowners to keep food attractants secured. Attractants include garbage, pet and livestock food, birdfeeders, and fruit trees, but also include livestock, gardens, and outdoor food cookers.

The best way to secure an attractant is to make it inaccessible to the animal by containing it within a secure hard-sided building (a structure with four-sided walls, roof and door). IGBC certified bear-resistant containers are useful in preventing the bear from learning that an attractant could be a food source.

Feeding wildlife, such as bears and deer, is illegal.