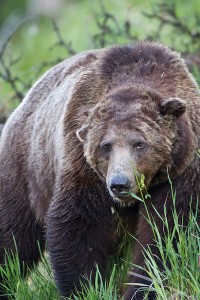 GLASGOW – Montana Fish, Wildlife & Parks staff have confirmed a grizzly bear is roaming near Big Sandy in north central Montana. This represents further expansion east of known grizzly bear movement and reinforces the need for communities and the public on the edge of grizzly bear habitat to be bear aware.

This bear was first seen last week near Conrad (where it got into dog food), then outside of Brady. It got into garbage near the Chester-Fort Benton Highway 223, it killed two chickens on a ranch 20 miles west of Big Sandy, it moved south of Rudyard, and then back to five miles northwest of Big Sandy on Sunday, June 7. This bear moved more than 10 miles a day at times, which suggests a young, wandering male.

In recent years, grizzly bears on the eastern side of the Rocky Mountain Front have expanded in numbers and dispersed into areas where they haven’t existed for decades. Since this particular grizzly bear is roaming near communities and homes where people aren’t accustomed to seeing them, the situation reinforces the importance of being bear aware.

Grizzly bear conflict specialists, wardens, and other FWP personnel are monitoring the whereabouts of this bear and talking to landowners in the area to hopefully prevent any additional conflicts.

“We try our best to communicate the locations of grizzly bears in areas where people don’t expect them to be or where they are new,” said area grizzly bear conflict specialist Wesley Sarmento. “However, we never know where they will show up next. This bear is showing up at random locations over 10 miles apart, and theoretically could be anywhere within a 100-square-mile area on any given day.”

During its travels so far, the bear has been hazed with cracker shells, vehicles, and by landowners who encountered it. Since this bear has demonstrated food-conditioned behavior, FWP staff has tried to dart and capture the bear, but so far haven’t succeeded. Sarmento and other FWP staff helped the landowner near Big Sandy who lost two chickens put up an electric fence around the chicken coop to prevent additional damage and also set a culvert trap to hopefully catch the bear. Unfortunately, it did not return.

Landowners can be proactive if they encounter a grizzly bear on their property.

“Landowners are legally allowed to drive off grizzly bears from their property—as long as such efforts are done without jeopardizing human or bear safety,” explained Sarmento.  “Carefully driving bears off their property with a hard-sided vehicle helps keep bears fearful of people.”

Grizzlies are still a federally protected species, even though populations have biologically recovered in two of their recovery areas, including the Northern Continental Divide Ecosystem.  FWP’s staff focus their efforts on keeping people and property safe.

“Due to the expansion of grizzlies on the prairie, we were concerned it was just a matter of time before we had a grizzly bear wander into our area,” said Mark Sullivan, FWP Region 6 supervisor in Glasgow. “Thankfully, we have a great team with Wesley and his crew and our local wardens and biologists. More than ever, it’s important for FWP to help people be aware of bears and how to keep from having conflicts with them.”

FWP has recently worked to increase grizzly bear awareness in north central Montana, including public presentations in both Havre and Loma last year. In addition, all hunter and bowhunter education students in the region are taught about bear safety, and pamphlets on how to hunt safely in grizzly country are available at FWP offices.

Other good information can be found online at fwp.mt.gov on how to live and recreate in bear country. A great resource on up-to-date activities and locations of prairie bears is the “Prairie Bear Monitor” Facebook page, which can be found here: www.facebook.com/prairiegriz/.

To avoid conflicts with bears and other wildlife, residents should:

Please report bear activity as soon as possible.  If you encounter a bear in north central Montana, please call Sarmento at 406-450-1097, your local FWP office, or 1-800-TIP-MONT.