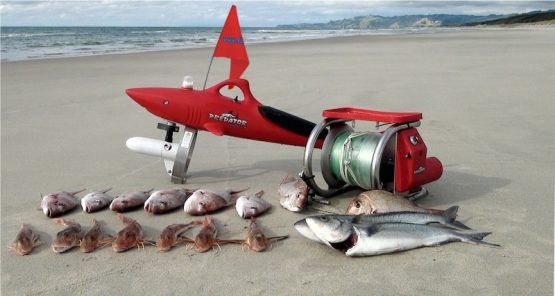 MT FWP is looking to ban the use of drones for fishing. Apparently, Fish Techies have deployed boats and airborne drones to track, locate, and cast to fish.

Remote controlled boats and aerial drones have become a more common tool used to catch fish. Currently, Drones may not be used to track animals during hunts. There is no specific language discourage drone use for fishing.

Surf fishermen have begun using drones and remote units to haul their baited lines beyond the breakers. Before powered technology, they used kites. Once the sinker attached rigs are beyond breaking waves, they are dropped to the areas where fish feed. A long cast from shore is often beyond their reach.

Apparently, a new Drone accessory called the Sky Rigger helps perform this task. An Australian company called Sea Ulcer, uses ZOOM to target fish. The line is attached to the drone and the operator flies the bait or lure, to the fish from above. Once dropped, the unsuspecting fish targets the offering.

Fish often sun on the surface. Schools of fish can also be seen from above. Normally, movement and vibrations from boats, other predators, or threats warn the fish of danger. Fishermen never see these distant fish.

Mini remote-controlled boats are used to access to spot fish and target no fishing zones. The closure zone below Libby Dam is where some of these complaints began. Some boats even fight the fish and return it to the operator.

Currently the law states that fishermen cannot use a gun, trap, or “other device” to entrap, catch, or capture fish. If a Drone is considered a “Other device”, then the FWP can legally regulate its use.

Downriggers, planers, sonar, fish cameras, and so many other legal new technologies have changed Fishing. Boat electronics can side scan, determine thermoclines, locate structure, and fish. It could be argued that the new Drones are simply another techy tool in the tackle box.

Spotter planes, radar, tagging, and many other techniques help locate fish in the oceans and large watersheds. Back in the day, we would catch a school fish, like a Crappie, and tie a balloon to it. The fish was released and would swim with the moving school. Low tech but it helped track the fish.

On a trip to Alaska, one group of fishermen programmed a drone to survey several areas where other fishermen were catching lots of fish. The “Secret Spots” were identified using a GPS and the next day the boys horned in their competition. Locating migrating schools of fish, hatches, bait fish, or evidence of potential great fishing can also be done using Drones.

Laws prohibit Drones from being flown near wildfires, and inside National Parks. Drones can be legally used by enforcement and Biologists for surveillance and research.

What this really comes down to is when is it “Fishing” and when is it not? Does the line need to be attached, like on a planer or cannonball dropper? Are modern fish finders, Drones, boats, and other gear to good or …? When does Fair Chase, and Sport, end or begin?

So much for just a hook, bobber, and a cane pole!

For more Montana Grant, find him using a cane pole at www.montanagrantfishing.com.