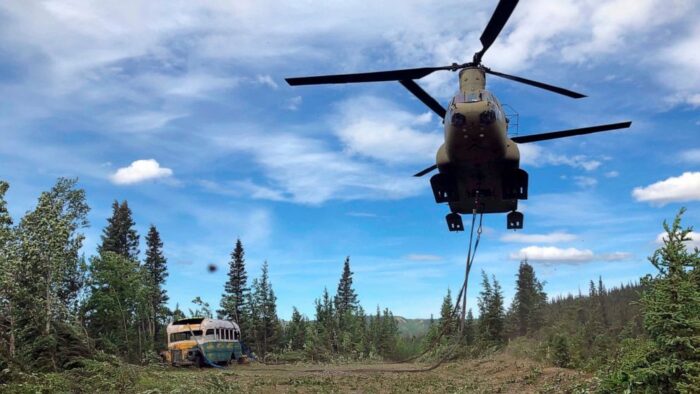 That famous bus that was in the book/movie “Into the Wild”, which highlighted the life and 1992 death of 24 year-old Chris McCandless, was removed a couple of weeks ago, according to an article on the ABC News website.  The Department of Natural Resources stated that “the 1940s-era bus had been used by a construction company to house employees during work on an access road in the area and was abandoned when the work was finished in 1961.”

The Alaska Army National Guard moved the bus as part of a training mission “at no cost to the public or additional cost to the state,” Feige said.

The Alaska National Guard, in a release, said the bus was removed using a heavy-lift helicopter. The crew ensured the safety of a suitcase with sentimental value to the McCandless family, the release states. It doesn’t describe that item further.

Feige, in a release, said the bus will be kept in a secure location while her department weighs various options for what to do with it.