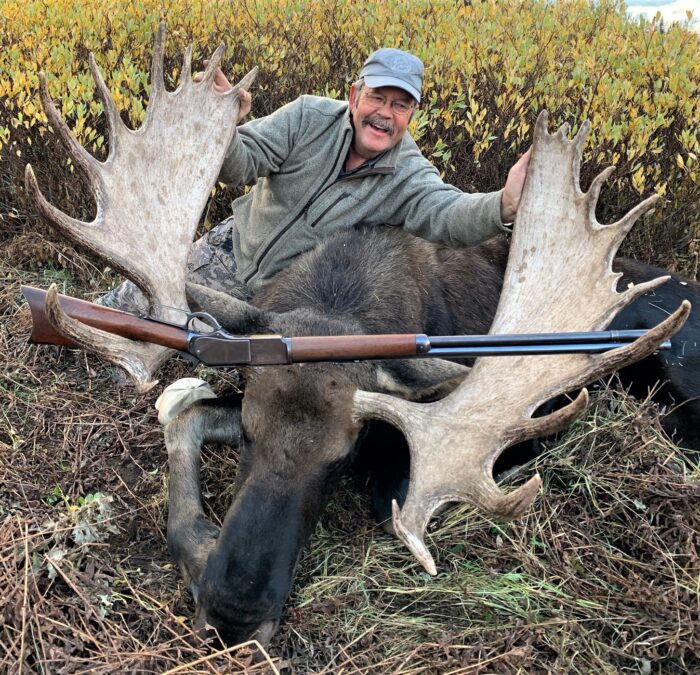 Great friends are wonderful but lucky friends are better yet! I am a lucky hunter! There I said it! My lifetime of hunting experience has set the stage for many successful hunting trips. I have been involved in many first-time harvest, special tag hunts, and hunts that were at the wits end. When you match up my luck and experience with another hunter’s experience and adventure, great things often happen. 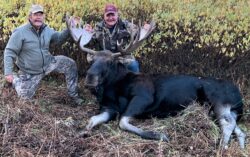 My friend Kirk Stovall is the perfect example. He recently drew a moose tag for the Cooke City area. This once in a lifetime tag could not go to waste. Kirk invited me to help him tag a grand Bull Moose. Not only was this to be an adventure, we would be hunting in the footsteps of Ernest Hemmingway.

The Cooke City area was his favorite fishing and hunting destination. Several of his books and stories were rooted in this area. He fished the Crazy Lakes and Avalanche Lake areas. These mountains were special to him. Several of his elk, grizzly bears and big bucks came from these mountains.

Our Moose hunt was based on Kirk’s excellent scouting and good information from campers and other hunters. Only 2 moose tags were issued for this area. We drove Kirk’s truck deep into the mountains. The roads could be the worst in Montana.

We spotted 2 smaller bulls at 1000 yards that were fighting and moving away. One was a shooter. As we watched and waited, a third Bull showed up and was crossing the willow thick swamp in front of us. We repositioned and ranged the bull several times. Only his huge paddles were visible above the thick willows. He marched through the swamp like he was on a mowed lawn. This was Kirk’s dream Bull.

I carried the tripod and spotted like a good gunbearer should. We ranged and shifted position until the Bull would cross in front of us under 200 yards. The tripod was up the rifle was at ready as I called out the shot. Kirk did not need my help. He is a veteran and expert hunter with a lifetime of filled tags. “Get Ready, the bull is going to go into an opening. Take the shot!”

BANG! I saw the hair fly off the Bulls shoulder. He shot a second time, but the first shot was perfect. Several yards further the Bull was about to drop when Kirk added one more shot that finished the Bull off. 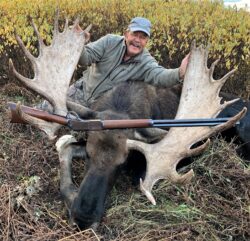 We went back to the truck and drove to the area where we last saw the great Bull drop. As LUCK would have it, the Bull was down only 15 yards from the road! Talk about great luck! Any hunter that has had to deal with a downed critter, miles from camp, knows what Luck this was!

What a wonderful adventure, with a great friend, that was topped off with a HUGE 47-inch-wide antlered Bull Moose. Now it was time for the work to begin. Having a Buddy along for the next step is also Lucky!

Good Luck is better than No Luck!

For more Montana Grant, tag him at www.montanagrantfishing.com.