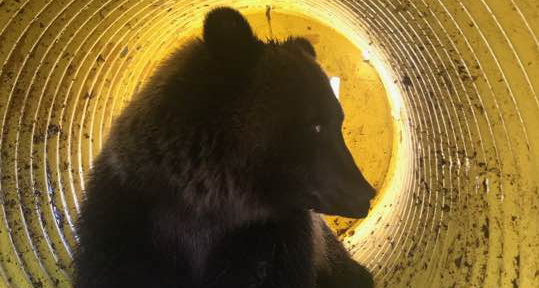 Grizzly Bears Captured, Moved to Remote Areas After Accessing Food
Attractants
Kalispell — Leading up to winter, bears are increasingly active and searching for food sources,
and Montana Fish, Wildlife & Parks is reminding the public to secure food attractants and “Be
Bear Aware.”
Below is a summary of recent management actions involving grizzly bears in the Northern
Continental Divide Ecosystem, which spans much of northwest Montana.
FWP has received numerous reports of bear activity across the region. Most of the reports involve
bears seeking food attractants, such as domestic fruit trees, garbage, and other food sources near
residences. To help with domestic fruit, FWP has established a Facebook page named Flathead
Fruit Gleaning where residents can post about trees that need to be picked and others can
express their interest in picking up fruit. The goal is to prevent bears from becoming food
conditioned by accessing food sources near residences. A food-conditioned animal actively seeks
unnatural food rewards, has lost its natural foraging behavior, and can be dangerous.
Montana is bear country with populations of grizzly and black bears that frequent higher and
lower elevations, especially river corridors. Bear are increasingly active and seeking food in the
fall months before denning season. Bears typically enter their dens for the winter beginning in
late November.
Homeowners should stay at least 100 yards away from wildlife and try to haze wildlife off their
property with loud noises. Chickens and other livestock should be properly secured with electric
fencing or inside a closed shed with a door. Recreationists are urged to “Be Bear Aware” and
follow precautionary steps and tips to prevent conflicts, including carrying bear spray and
knowing how to use it, and travel in groups while making noise.
Hunters are reminded to “Be Bear Aware” and properly store food and carcasses. Hunters should
avoid hanging carcasses near houses or garages. Carcasses must be suspended at least 10 feet
above the ground and 4 feet out from any upright support. Hunters are encouraged to carry bear
spray and know how to use it. More food storage and safety information are available on the
FWP website, fwp.mt.gov.
Residents are encouraged to report bear activity as soon as possible. To report grizzly bear
activity in the greater Flathead Valley, call FWP bear management specialists at (406) 250-1265.
To report black bear and mountain lion activity in the greater Flathead Valley, call (406) 250-
0062). To report bear activity in the Cabinet-Yaak area, call (406) 291-1320.
Summary of Recent FWP Regional Management Actions Involving Grizzly Bears
Sept. 11
FWP bear specialists captured a subadult male grizzly bear off East Edgewood Drive east of
Whitefish after the bear killed a pig and fed on fruit trees near a private residence.
This was the first time this bear had been captured and involved in a reported conflict near
residences. The bear was not observed acting aggressively. FWP moved it to a remote section of
the Flathead National Forest off the east side of Hungry Horse Reservoir after consulting with the
U.S. Forest Service and U.S. Fish and Wildlife Service.
Sept. 26
At 5:30 a.m., a vehicle driving on Montana Highway 40 east of Whitefish struck and killed a female
grizzly bear cub of the year. An adult female grizzly bear and another cub of the year were
reported seen but not involved the accident. FWP officials collected the carcass from the site.
Oct. 13
FWP bear specialists captured a subadult male grizzly bear north of U.S. Highway 2 on private
property next to the Columbia Falls Aluminum Company property. FWP was attempting to
capture a female grizzly bear with a yearling that was feeding from domestic fruit trees and
garbage near residences but captured the male grizzly bear, which was also believed to be eating
from garbage in the area. The bears were not observed to be acting aggressively. FWP moved the
bear to a remote section of the Flathead National Forest up Dead Horse Creek in the North Fork
of the Flathead River after consulting with the U.S. Forest Service and U.S. Fish and Wildlife
Service.
Oct. 13
An FWP bear specialist captured an adult male grizzly bear west of Pendroy on the Rocky
Mountain Front after the bear entered an open garage and fed on treated grain. Agricultural
producers saw the bear in the garbage and reported it to FWP. The bear was not observed acting
aggressively but remained in the garage. FWP captured the bear, which had been previously
captured for research but did not have an FWP conflict record. The bear was relocated to the
Puzzle Creek drainage of Flathead National Forest after consultation with the U.S. Fish and
Wildlife service. The producer is installing a garage door on one side of the garage and is
considering bear deterrence options from FWP for the other entrance. FWP also provided the
producer bear spray to carry in case of a surprise encounter, which are the most common cause
of grizzly bear attacks.
Oct. 21
FWP bear specialists captured an adult female grizzly bear and male cub of the year on private
property off Columbia Falls Stage Road near Columbia Falls. The bears were reportedly tipping
over garbage cans at residences near the Flathead River south of town and eating domestic fruit
that had fallen into residential yards. The bears were also pictured accessing unsecured garbage
on a back porch of a residence. The adult female was previously captured for a research project
and is 19 years old. It previously denned in Glacier National Park, and FWP moved the bears to
the Logan Creek area in the park after consulting with the National Park Service and U.S. Fish and
Wildlife Service.