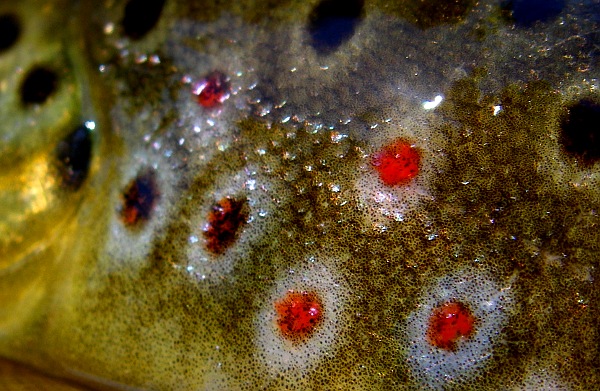 Brown trout can be found in 45 states. They can exceed 40 lbs. and inches. Browns are common trout to Montana, are not local!

Brown trout were first introduced to the US from Germany in 1883. Eggs were shipped to America and raised in a hatchery until 4,900 fry were stocked in Michigan’s Baldwin River. Maine introduced them in 1885 and by 1900, Brown Trout were in 38 states!

Most of our brown trout stock has come from Germany, Scotland, and England. Some are more lake oriented while others are river trout. Brown trout are thriving and not endangered. They can sustain higher water temperatures than other trout. With proper Catch and Release techniques, they can withstand more fishing pressure.

Brown Trout are common in cold water areas where the British Army traveled. Iraq, Syria, Afghanistan, India, and many other unique destinations have healthy populations of Brownies. Even Hawaii has a brown trout fishery. In captivity a Brown trout can live 20 years, but a decade is an old trout I the wild. 95% of all eggs die before the first year. Baby trout have no scales for protection until a month old. Males have a high mortality after spawning.

Since Browns are Fall spawners, they can create hybrids with Fall spawning Brook Trout. Their offspring are called Tiger Trout. Some hatcheries deliberately create this hybrid for recreational stocked fisheries. Hybrids with Rainbow Trout, which are Spring spawners, ca be manipulated in hatcheries to create “Bowbrowns”.

Browns can be tough to catch, especially in fisheries with a lot of fishing pressure. 90% of their diet is subsurface. Since Browns are cannibalistic, streamers work well. Sculpins and crayfish and other bottom shellfish and creatures make for a fat meal. Mice, small ducks, and other critters can make an opportunistic meal. At times, surface insects and terrestrials create an opportunity for catching.

Brown Trout populations can quickly decline if too many large females are removed. Each female can produce 2,000-10,000 eggs per spawn. If the average size of females declines, so will the overall population. Browns can also devastate other native or wild trout populations. Ironically, most fishermen have no clue if the trout hey catch are male or females until they gut the fish.

In a hatchery, Browns carry a disease called Furunculosis which produces huge ulcers on other trout species. Entire hatchery populations ca be destroyed from this disease, without treatment.

Browns are currently considered a “Wild Trout” in Montana, but not a “Native” trout. Some trout fisheries are being removed and restocked with “Native” cutthroat trout. Since Browns eat crayfish, mollusks, and other aquatic critters with exoskeletons, they tend to be high in arsenic, mercury, and lead. Fish consumption warnings are published to identify where you should not eat these fish.

For more Montana Grant, find him trouting at www.montanagrantfishing.com.