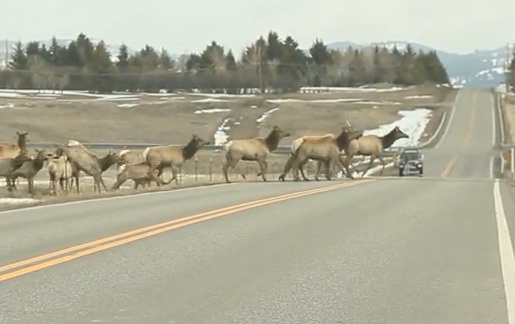 ANYTHING FOR AN ELK!!!
By Montana Grant

As Shrapnel Kirk and I were returning from a hunt, we spotted a huge herd along the side of a hill, out of sight of the main road. 75 or more elk were stomping in a recently planted winter wheat field. A huge log home and complex was jut above the herd. Two 6×6 bulls and more than a dozen spikes were in the bunch. One was at least a 350-class bull. We stopped and took a picture from 100 yards. 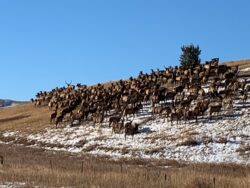 As it goes, they were on private land, too close to the road, and within 100 yards of the home. We went on our way. Honest Sportsmen would do the same. If it is not legal, don’t do it! Our hunt was about spotting, stalking, and staying on land that we had written permission to be on. We never have to look over our shoulder for a Game Warden. We enjoy the day. When we tag a critter, it is legal, honest, and ethical. Somehow meat tastes better that way.

Later as we circled back, several trucks, trailers, and cars were jammed along the road and elk were quickly being dragged and gutted. Even if these road hunters had permission, they were literally in a home’s driveway. The log home was a stone’s throw away. One cow was between the main road and the fence!

We saw only cows down. Hopefully the great bulls escaped a lousy death. None of these Roadside Shooters had hunting gear on. They saw the elk, stopped, and fired. We have all heard this too many times. What are these slob hunters thinking? They were quickly at work trying to load these 600-pound critters as quick as they could. Traffic was slowed and cellphones were taking pictures.

Maybe they were the landowners or their friends. They may have called their friends and said, “Get out here quick!” Even if they could why shoot from the highway, in the landowner’s front yard, in plain sight? These shooters had Elk Fever. All they saw was elk and they were going to “Git Theirs’s!”

We have all heard this story before. The antelope herd is close to the road, a truck pulls over, and rifles stick out the windows. Bang! A couple guys jump the fence and grab the critter and throw it in the truck. Within minutes the deed was done. Other hunters spot a big critter and sneak in private land. “Trespassing only matters if you get caught”, is their mantra. Recently, a similar shooting event happened near White Sulphur, where 50 elk were killed by shooters in over 100 vehicles! Many had no License, tag, permission, or desire to abide by the laws.

These kinds of stories ruin the reputation of the legal and ethical hunters. Lies are told, tags are faked, laws are broken, all so they can say “I got my elk!” Oh, and they leave the guts piles next to the road. Calling these idiots “Hunters” would be like calling Looters, “Shoppers.”

The spice of honesty makes legal game harvests taste better. There are no bitter bites when the meat is an ethical harvest. Real hunters savor the sunrises and sunsets along with their honestly hunted meat.

As Shrapnel and I drove up the road, we passed a Game Warden in route. Cell phones must have been used to make a call. Pictures tell the rest of the story.

For more Montana Grant, find him hunting at www.montangrantfishing.com.