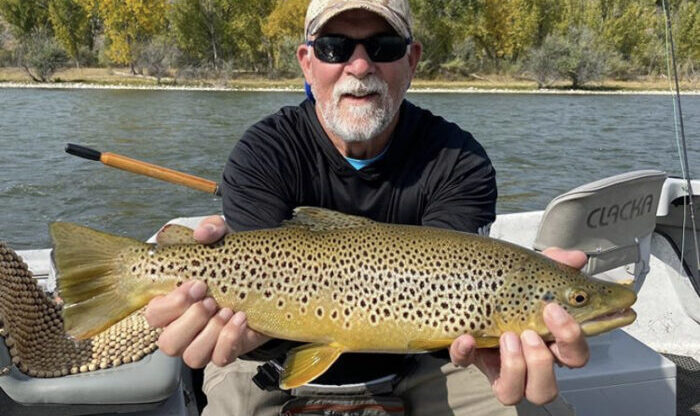 We just had one of our earliest and most extreme cold snaps for the late Fall season.  This is the true start of transition on the Bighorn and ultimately helps clean up the system.  That being said, the grass is making its way out, but definitely presents some obstacles in angling.  The Upper 3 Miles remains the cleanest section, although clarity has been better below 3 Mile.  There are plenty of places to get out of it down there.

It’s just a bit early for our Fall Baetis, but we’ve seen a handful.  Mostly little guys up feeding on them right now, but expect the hatch to intensify as we move into November and some of the bigger guys start looking up.

Streamer fishing has been very solid, but not so much the ‘pounding the banks’ game.  A full sink or long sink tip line is the way to go right now and dredge up the middle runs.  Just pick the main guts of the run and start fishing it!  It’s hard to beat a Grinch or Thin Mint right now.  We also really like the Hot Bead Leeches too.

Nymphing has been good for some, tough for others.  Not much bug-wise has changed.  Orange Scuds and Sowbugs on the Upper River, Worms on the lower (below 3 Mile).  As stated above, there are some better wade runs below 3 Mile, if that’s what you like to do.

This post was written by Pete Shanafelt via https://bighornangler.com/bighorn-river-fishing-update-october-28/