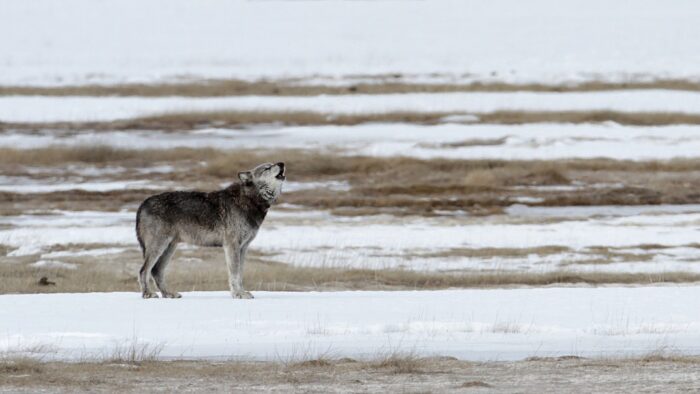 For the Montana wolf trappers out there, today is the big day!

With the ever-changing regulations involving wolves, trapping and wolf trapping, it is always a good idea to keep a copy of the regulations with you and to read what you need to know BEFORE setting traps.  Be ethical, respectful and GO GETTUM!!!

CLICK HERE for the current regulations posted for wolf hunting and trapping in Montana.

Here is some information from FWP on the history of gray wolves and how they were reintroduced to the area:

The gray wolf was extirpated from the western United States during the 1900s, primarily due to loss of habitat and conflicts with people. In 1884, the first statewide bounty law was passed in Montana. That first year, 5,450 wolf hides were presented for payment. All but three Montana counties reported a bounty payment for wolves from 1900 – 1931 (Riley 1998). Bounty payments were highest in eastern Montana counties, mirroring early explorers’ observations of a close association between wolves and bison. Wolves as a self-sustaining, breeding population were probably extinct in Montana by the 1930’s.

Although wolf packs were eliminated from Montana by the 1930s, tracks, scats, and/or observations of large canid-like animals were either reported or killed up until the 1970s. Most are thought to have been dispersers from Canada and little to no successful breeding activity was evidenced or sustained consistently through time.

In 1980, the Northern Rocky Mountain Wolf Recovery Team completed a plan which would guide wolf recovery efforts for a future wolf population in the northern Rockies of Montana, Idaho, and Wyoming. The recovery plan was revised in 1987. The plan designated three recovery areas – Northwestern Montana, Central Idaho, and the Greater Yellowstone – each of which included some portion of Montana.

Wolves from Canada began to colonize the Glacier National Park area in 1979, and the first wolf den in the western U.S. in over 50 years was documented there in 1986. The wolf population in northwest Montana grew as a result of natural reproduction and dispersal. By the end of 1994, there were about 48 wolves in and around Glacier National Park.

In 1995, three family groups (a total of 14 wolves) were captured near Alberta’s Jasper National Park, transported to Yellowstone National Park, and placed in acclimation pens. They were held for 10 weeks prior to release. Two of the females subsequently denned and produced nine pups in Montana. Most settled in the same vicinity of their acclimation pens, demonstrating the potental advantages of a “soft” release technique.

Also in the winter of 1995, 15 wolves were reintroduced into the wilderness areas of central Idaho. These animals moved widely throughout central Idaho and behond. Many of these wolves moved north, some to the upper Bitterroot Valley. In 1996, three packs produced 11 pups.

In the winter of 1996, 17 wolves were captured near Fort St. Johns, British Columbia, Canada and were again released into acclimation pens in Yellowstone National Park through a “soft” release. Twenty wolves were released in central Idaho as a “hard” release.