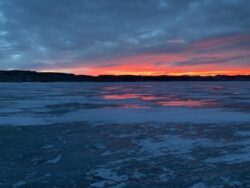 A man drowned at Fort Peck this past Saturday.  According to a recent article by David Sherman on krtv.com, 72 year-old Roger Schaad of Rexford died in Fort Peck Reservoir after fishing on the ice with two UTVs.

One of the UTVs fell through the ice and quickly became submerged with two men on-board. One of the men was able to escape and the other group was able to pull him out of the water and to safety. The second man was not able to get out and drowned as a result.

Petroleum County Sheriff Bill Cassell also warned sportsmen who plan to ice fish at Fort Peck to be extremely cautious of ice conditions. He also thanked “all the responders who assisted in last night’s rescue. Without all of the brave men and women who answered the call last night this could have turned out much worse than it did.”

There will be an autopsy on January 19th in Billings.