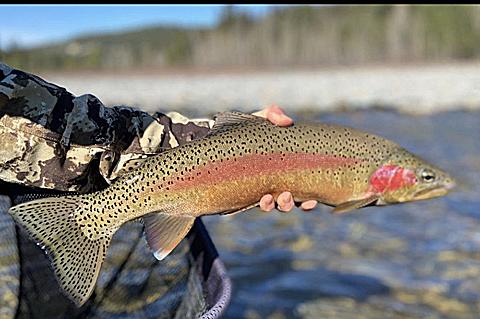 Here is the latest fishing report for the Kootenai River from Linehan Outfitting:

This Kootenai River Montana fishing report is being brought to you by Orvis Endorsed Linehan Outfitting.  This report will be updated weekly to provide current conditions, weather, hatches, patterns, and flows to our local waters and across the state.

Flows remain low here on the Kootenai River, the days are getting longer and generally warmer as well.  While it’s never written in stone, discharge from Libby Dam should remain around 4000cfs through April and until runoff starts.

Expect mostly cloudy skies with chance of light precipitation throughout the week.  Conditions are currently outstanding and gray skies this week

Dry fly action is still minimal but bugs are starting to perk up during mid-day.  Look for early caddis here and there and blue winged olives for now.  March browns will follow soon.  If you see a rising fish, you’re in business.  Water is super clear this time of year.  Don’t expect fish to be push overs.  They will likely not be too fussy but you will need to feed them cleanly.  Make a good cast, target trout noses, and get a good drift.

For now, nymphing is still the best bet.  You don’t need a bunch of junk and with low flows you really don’t need that much weight either.  Set your indicator about 5 feet from the first fly and start with a single BB splitshot.  Concentrate on walking speed current and 4-6 feet of water.  Boulder gardens and softer currents will hold fish.  Trout are less likely to be in faster water or riffles this time of year.

Streamer action has been picking up.  As I always remind you, don’t expect big numbers. You will not hook up as often compared to nymphing, but you may hook up with a significantly bigger fish.  Keep the fly down and fish it slowly.  Make sure it stays near or at the bottom for as long as possible.  You can even dead drift a streamer this time of year with success as well.  15 foot depth charge sinking tips are best.  Full sinking lines are not really that necessary during periods of low flows.  White deceivers, circus peanuts, and purple will move fish.

All access points and boat ramps are clear.  Wading conditions are great under low flows especially below between the Kootenai Falls and Bighorn Terrace boat ramp. Nymphing in this stretch and through China Rapids section has been very productive lately.

Let’s see…the Boston Red Sox have officially started Spring Training.  It’s a new year with just a few familiar faces on the field but manager Alex Cora is excited to begin working with new talent and feels the team has enough to compete well.  Pitching is always the biggest concern but a recent strong outing by starter Eduardo Rodriquez bodes well and news that Xander Bogaerts will be healthy and ready for the opener is all good.  GO SOX!