BAT FUNGUS AMONG US!!!
By Montana Grant

Pseudogymnoascus destructans, is the fungus that causes WNS. The dead bat also had visible lesions in the skin, also a characteristic.

This is the first case discovered in Montana. Local testing of Bat waste has revealed traces of the fungus, but no bat has been confirmed sick from WNS. Neighboring states have recorded bat mortality from the fungus. 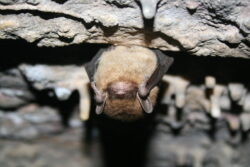 This disease has killed millions of Bats since being discovered in North America in 2006. The white powder grows on the Bats faces during hibernation. This results in Bats emerging from hibernation too early. Their fat stores are not enough to help them survive until improved weather.

WNS has been confirmed in 36 states and seven Canadian Provinces. Entire colonies have been devasted. The disease does not affect livestock, pets, or other wildlife. Declining Bat populations means increasing mosquito populations.