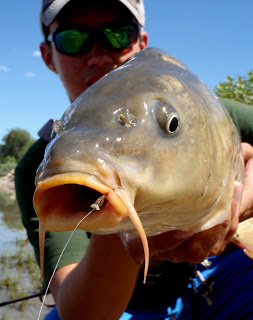 CARP FOR DINNER!!!
By Montana Grant

Carp have become a popular fish. These strong fighters can be great sport. Many Fly Anglers call them Poor Man’s Bonefish. These bottom feeders feed on insects, crustaceans, and organics found along watersheds and lakes.

Back in the day, we used to catch these beasts with cane poles. No reels or fancy rods. Our bait was bread balls and corn. We would throw corn niblets out into the water where we were fishing. After a while, the carp would migrate into our area. Catching carp over 10 pounds was pretty common. So was losing cane poles!

My Grandad always told me to throw back smaller fish. Big Carp were easier to filet and clean. The bones were bigger and easier to address. A saltwater rinse was also needed to thoroughly clean them. My Grandmother made us plant the Carp carcass into the garden, as fertilizer.

When we cleaned the Big Carp, we fileted and skinned them first. Removing visible bones was important. The thick filets were then allowed to soak in cold salt water for an hour or so. After a salty soak, we rinsed them and dried them with a towel. I guess you could freeze them, but we never did.

Our next step was to poach the filets in hot water, until the meat began to flake. Some fresh herbs and spices were added to the pot. Once the meat was poached, we would pretend it was crab meat and made it into Crab/Fish Cakes. Old Bay seasoning had a recipe on the side of the can that we used. A quick Tartar Sauce would top it off.

Some folks avoid eating Carp because they say they taste like mud. If you have ever tried a Carp Cake, you may sing a different tune. I would suggest that you not eat any fish from questionable or polluted waters. Carp from clean water are a tasty treat that you may want to try.

We also would cook Carp filets in a foil pack spiced with Old Bay, onions, butter, and sliced tomatoes. We were never disappointed.

Carp Cookin Can be Fun!