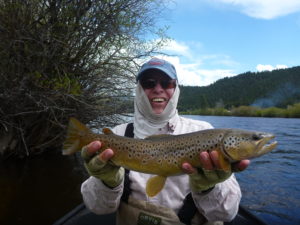 The Big Hole is looking fantastic.  The river is dropping, and has been for the last couple of days.  Most of the boats are concentrated in the upper part of the river, which is still the most productive stretch thus far this season.  We have been anxiously waiting for the big bugs to show up and give us a reason to fish dry flies, but that has not happened yet.  The water temps are already getting up to 60+ degrees during the day and keeping the trout very active and still willing to chase a streamer.  The yellows and whites have still been catching great fish, but the pumpkin bugger is beginning to fish as the salmon fly nymphs are starting their migration to the banks of the river.  The nymph game is still holding on strong with various SJ worms and pats stones still catching most of the fish.  Here are a few of the pics from last weeks successful trips.

Lia and I fished the canyon a couple of days ago as well.  Very few boats have been willing to brave the fast water, big waves, and the diversion dam.  The water was fast, but Lia managed to stick a couple nice browns in the slow water along the edge.  The diversion was a big wave but still avoidable and easily run with a self bailing boat and a good oarsman.  I couldn’t find any evidence of the big bugs coming out yet but I would imagine that the hatch will happen any day, the Western Tanagers have already shown up and they are always right on time for the party!

I also had a chance to fish the Beaverhead and a good friends pond.  The Beav is a little slow.  I floated from Dam to Highbridge and we caught 6 fish, none of them over 16, which would have been rare 5 years ago.  The flies we got them on were an 18 red sparkllid and an 18 pearl lightning bug, and only one chase on a black bugger.  The water is clear and low and fun to fish right now, but after looking for those big fish at the top of the river, I think it will be a few years before the big fish are back in there in numbers.   The pond was also slow, which is odd, but we did poke this massive hen toward the end of the fishing day!  Our shop will be opening at 7:30 from today on, and will be taking call in shuttles earlier than that if anyone is heading out super early, or just call me the night before at the shop.  Good luck out there and stay safe.

For more information on