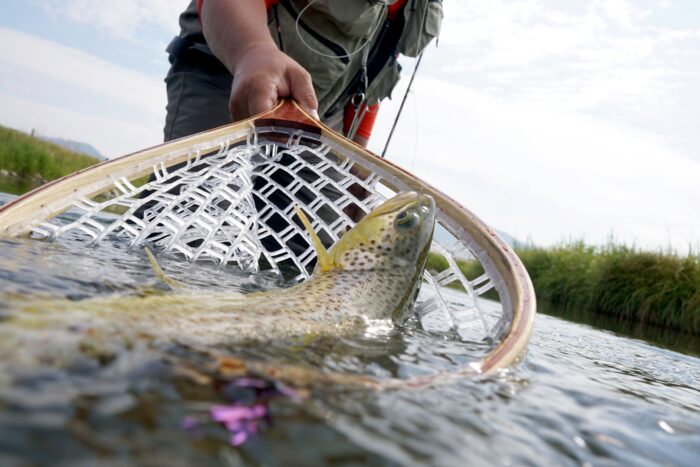 Fishing can get too HOT at this time of the year. Montana seems to be a place of extremes. Snow or too HOT! Normally we get the heat later in July and August but this year, the area is already heating up. Several forest fires are already burning.

Fishermen are still arriving by the boatload. The Madison is stacked and packed. There are times with fewer fishermen, but those opportunities are getting fewer. Guides are busy and this means that fish are getting hooked and released.

Tourists and newbies often measure the day’s success with pictures. Cellphones have become the camera of choice. Fish Selfies are now the rage. Sharing bragging rights online is important to some. Hundreds of pictures or videos can be shown off quickly, but at the fish’s expense. The problem is that taking picts takes more time.

If you are going to eat a fish, no problem. Clunk it in the head and take photos all day long. Have a cooler of ice to protect your future meal when done posing. Know the limits and use the resource ethically. 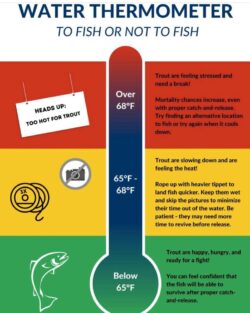 Once the fish has been hooked, the battle begins. If the fish is to the net within a couple minutes that’s great. If it takes longer, the clock is ticking. As the fish battles, it is having lactic acid building up in its muscles. Important energy for survival and reproduction is being used up. A fill up happens one tiny insect at a time.

A skilled angler can land a quality fish in less than 5 minutes. There are certainly fish that take longer. The longer the battle, the less likely the fish will survive. Inexperienced fishermen often take more than 10-15 minutes to land a fish. Even if the fish is in the water, breathing becomes an issue is fast moving water.

Picture time simply adds to the stress. Fish are often squeezed, dropped, flopped, kicked in the dirt, sand, or gravel. Rubbed and scraped in the net or simply suffocated. They may swim away but many soon turn belly up soon after. Eagles, pelicans, and other scavengers often clean up the dead fish before they are even noticed.

Water temperatures are warming up which also stress out the fish. As water temperatures rise, fungus, bacteria, and disease also become a factor. If the net rubs on the fish, protective mucous is removed and an open site of disease is amplified. Its best to use a rubber, wet net to capture the fish. Hold the fish in the water until the camera is ready.

Be quick. Assign someone as the photographer. Use a Go Pro and then pick, choose, and enhance pictures after the trip. Use forceps, a proper net, keep the fish out of the dirt and rocks, don’t crush the fish’s air bladder or body. Make sure your hands and the net are wet before handling the fish.

Each fish caught will make you a better fisherman. Learn from mistakes and experience.

Fish Picts are great but not at the risk of the fish!