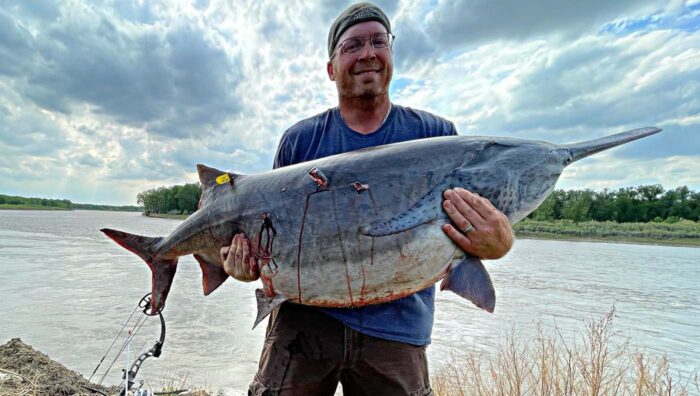 Montana bowfisherman Steve Harris, Jr. shot and reeled in a world-record paddlefish earlier this month. The whopper fish weighed 92-pounds, was 67 inches long, and had a girth of 37 inches. It easily topped the previous record, an 89-pounder caught on the Missouri River in Nebraska in 2019. Harris’s trophy catch came out of the Yellowstone River, which is typically known for its superb trout fishing but also holds a healthy population of American Paddlefish, a native species that has inhabited North American waters since the Cretaceous period 65 million years ago and is known for its distinctive horn-like paddle.

Harris, an avid outdoorsman, began targeting paddlefish with a rod and reel as a kid. “My first catch was a 13-pounder when I was 13 years old,” he recalls. He has caught at least one each year for 30 consecutive years. In some years, he caught as many as four, fishing in Montana and North Dakota, and he estimates he’s hauled in around 80 paddlefish in total, five with a bow. Though it’s typically forbidden to target game fish with bowfishing gear, paddlefish are an exception. Still, bowfishing for paddlefish in Eastern Montana is a relatively niche endeavor, and Montana Fish, Wildlife & Parks manages their harvest with a permit system.

Read the full article by Sage Marshall Steven Hill on the Field and Stream website here.