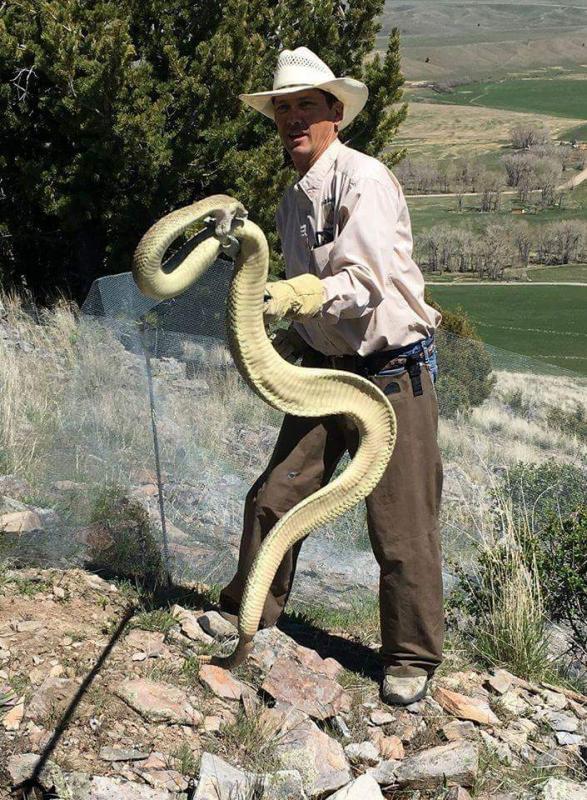 Rattlesnakes can be found in most states. In Montana, rattlers are becoming more common. The changing, hot, dry weather makes for a perfect environment for all snakes. I found a Bull snake hugging the fence line in my yard just yesterday. AS I closed in with the mower, he skirted under the fence and became the neighbor’s problem. This was only the second time that I have seen a snake in my yard!

Its common to see Rattlers along roadways and under debris, or rocks. “Seek and ye will find.” Usually, the snakes let you know they are there before you find them.

Maryland also has its share of snakes. Timber Rattlers, Copperheads, and many other non-venomous snakes have become increasingly abundant. As a kid, growing up in Western, Maryland, I only saw Rattlers, when I hunted for them. Certain areas were known for large snake dens, so as kids we had to see them to be sure. We bushwhacked, hiked, and ranged all over the mountains, and I never saw a surprise snake. Copperheads were also not very common. Usually, if you left them alone, they left you alone. 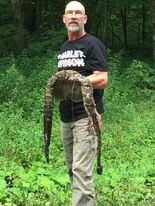 I remember my first Rattler encounter, when Fall turkey hunting. I had bushwhacked into the dark, toward my favorite roosting trees. I parked myself against a log and waited for the sun to rise. From the moment that I sat down, I kept hearing movement in the leaves. There were all kinds of rodents, walking stick insects, and other rustlers in the leaves. As the sun came up, I looked over and saw the rustling culprit! Not 3 feet away, was a 3-foot-long timber rattler! He must have been out hunting too and the cold morning had slowed him down. I was leaning on his home.

So, the other day, my Appalachian Hunting buddies discovered a huge Rattler in our old stomping grounds, along Fairview Road. It was in the old road and had been hit by a vehicle. The carcass was a few hundred feet from our old hunting camp. Now, Montana has some huge snakes. A giant rattler, found near Ennis, MT., opened a lot of eyes. Bull Snakes in Montana get several feet long and eat Rattlesnakes for lunch. This Maryland Rattler was the biggest that I had ever seen from Maryland. 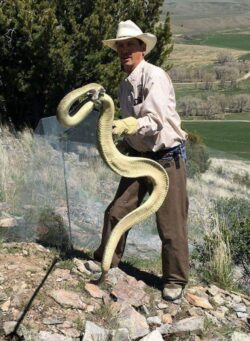 You can age a rattler by counting the number of rattles on their tails. Every time they shed their skin, a rattle, or skin scale is left. These rattles can be broken off or lost. Recently, many rattlers are being found with no rattles. These “stealth rattlers” also tend to be more aggressive.

Like it or not, your chance of a Snake encounter is greater now than ever. There are more snakes slithering around and having a close encounter is more likely. They are searching for food, mates, and shelter. Your critters, kids, and family need to be snake aware.

If you are in a dense snake area, consider wearing snake proof chaps or shin guards. Educate everyone about these serpents. Have a plan, just incase someone gets bit! A snake capture stick works great to pick the snakes up and transport them. A sack, feedbag, or sealed bucked are good ways to control a captured snake. Keep your distance, if possible, but if these snakes are in your space, they need to go.

I hope that my hunting buddies in Garrett County, MD. are paying attention.