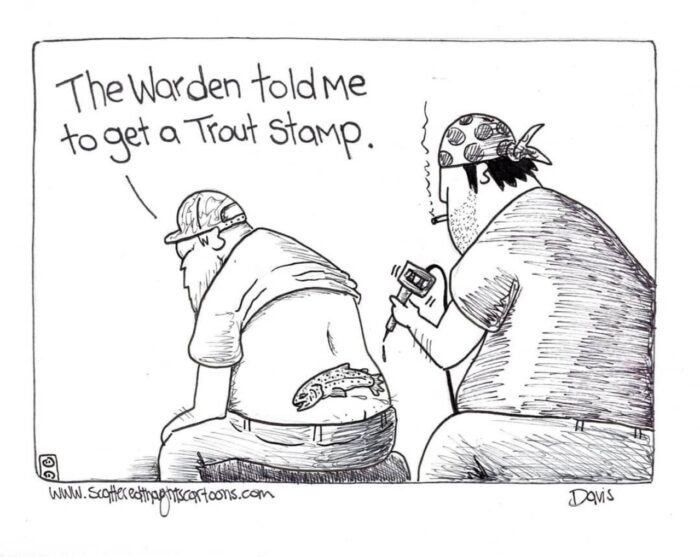 There are few old fishermen and hunters with a tat. Maybe the military guys have a couple left over from a rough night while on leave. Tats often identify a person. The only way that Custer’s brother, Tom, could be identified, was by his tattoo from West Point. Police also use tats to confirm identity.

Tats today are on most people. I wonder what percentage of our population is now tatted up. I guess they are like the Vikings. Many societies enhanced their skin to have a decoration, memory, or just because. Native Americans were smart enough to use paint to decorate themselves. Now they could change their skin as they chose. They didn’t have to live with the same tat forever.

Sportsmen love tats! Trout Tats have become the new thing. A giant rainbow or brown trout wrapped around their calf, or across their shoulder. These tats often have backgrounds of rivers, mountains, and other critters. The other leg can host a tat or two of an elk or other grand creatures. Save at least one limb for family picts. The back and chest can be for a quote that you live by or the names of places you fished. 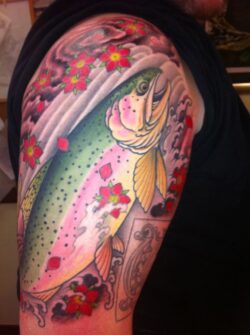 Telling the story of your life is a noble choice. You don’t have to be in a gang to have tats. Besides, most gang members wear the same tats. My guess is that most tat candidates want something more personal and unique. Our skin becomes the canvas for where we lived our lives and what fish, or critter was our favorite. Mothers are often emblazoned on their skin. Moms always know best and you gotta love Mother Earth!

I like the guys that tat a ruler on the side of their leg. 12 inches will gradually change as wrinkle and sagging appears. Face and neck tats are extreme for me. Intimate body parts are also to personal. First impressions are important. If you see someone’s face covered in tats, you may not see the real person behind them. 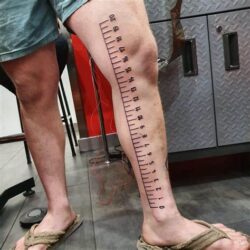 As we age, the body art will start to look more like graffiti, then cave art. That grand Rainbow trout will now look more like Snuffleupagus than the Salmo gardenias it once was. Pick your tats wisely. Consider a tat that will morph over time into something different rather than something it once was. Tats are not always for Catch and Release. Without intensive and expensive surgery, the Tat is there to stay. Pick wisely!

Future Tats need to be recognizable.