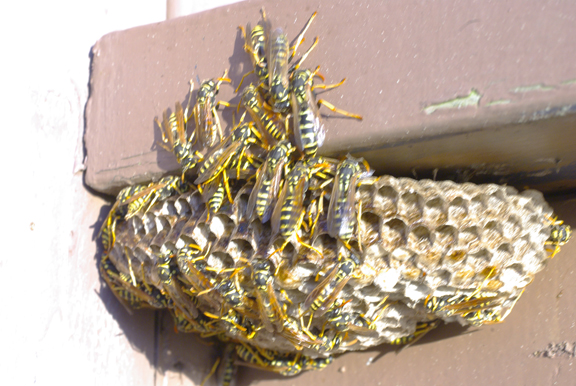 DON’T BUG ME!!!
By Montana Grant

Wasps and Hornets are a big nuisance. They are most abundant in Summer. Montana is home to several “Social” species of wasps. Hornets are large wasps.

The other day, my daughter returned from NE Montana. Her in laws farm wheat, which is currently full of huge grasshoppers. When she parked in the driveway, her front end and wheel wells were hornet magnets. Hundreds of Western Yellowjackets swarmed all over the corpses of the dead hoppers. Just getting into and out of her ride was a challenge.

Normally, hornets or wasps are not aggressive until you mess with their nests. Then run and duck. Their stings are like someone is putting a hot cigarette into your skin. Allergic reactions are possible. Each hornet can sting several times, and often do.

My next job was to use a power washer to spray off the dead insect’s attraction. Once her ride was Bugless, I hosed the hopper mess into the lawn. The hornets took two days to feast on the crunchy hopper graveyard.

Montana is also home to Bald Faced Hornets and Paper Wasps. I once had a friend remove a basketball sized paper wasp nest from his tree. They did not want the wasps harmed, so I waited until dark and used a smoky, charred rag. The smoke calmed the hornets. I then covered the nest with a large plastic trash bag. After sealing the top, I used a pair of pruners to snip a long section of the supporting branch. This allowed me to take the nest to a safer area, where I wired the branch into another tree. The bag was removed and not a single wasp was harmed.

Wasps and hornets can travel 1000 yards and still find their way home. Nests are where the colonies work together. These nests are often found in sheds, on eves of roofs, or in trees. They also make subterranean nests. Only the fertilized females survive the winters, often underground.

You can use chemicals to kill hornets and destroy their nests. Some folks burn the nests, but both methods can cause more damage. A couple frosts and cold temperatures will naturally kill off the drones and workers.

Try using a paper sack, filled with newspaper. Twist the top like a holdfast of a paper wasps’ nest and create a decoy nest. Now hang it in an obvious place where you want to prevent nests from being built. Wasps and hornets rarely get close to other colonies. This allows wasps to live nearby, but not by your steps and traveled areas. They can help control other insects and be an asset rather than a nuisance.

If you see a wasp hole entering a wall, do not plug or seal it. The internal insects will always find an escape route into your building or home.

Reduce attractants around your living area. Wasps and hornets feast on trash, dirty grills, rotten grains, or anything sugary.

A little prevention and a few decoy nests can really help!