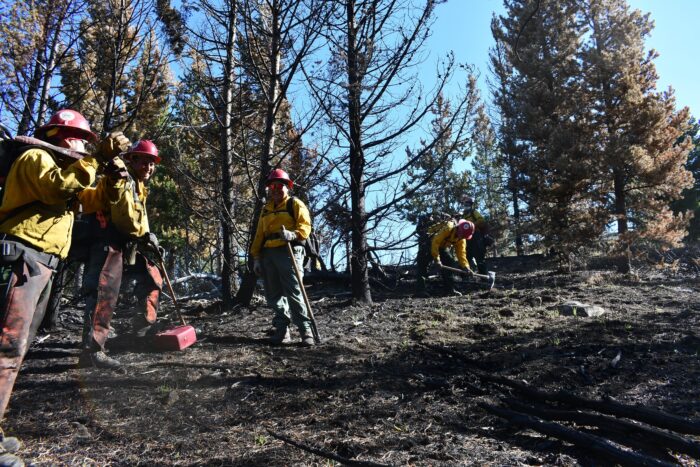 Livingston, MT- October 7, 2021– The Custer Gallatin and Helena-Lewis and Clark National Forest have teamed up to complete the Burned Area Emergency Response (BAER) work for the American Fork Fire.   The BAER Program provides a means to mitigate immediate hazards brought about by a fire within that given fire perimeter.

“We’ve had a great team working on both portions of the American Fork Fire, whether it be the Helena-Lewis and Clark or the Custer Gallatin National Forest.  This team is focused on areas where visitors recreate and visit the forest including the Shields River Loop, campgrounds, trails, the Crandall Creek rental cabin and the burned portions of road corridors to provide for essential public safety,” said Alex Sienkiewicz, Yellowstone District Ranger.

The maps for the American Fork Fire portray a mosaic burn pattern where small portions of the American Fork fire burned at a higher severity and many portions of the fire burned at a moderate or lower severity.  This mosaic of burn severity is generally considered a desirable outcome because it supports a diversity of vegetation types and age classes in the post-fire environment.  Such diversity typically results in more varied habitat and increased resiliency to future wildfires and insect infestations.

Each of the maps do show smaller areas of increased storm flow and sedimentation potential, particularly within the Clear Creek, Scofield Creek, Turkey Creek and Middle Fork Sweet Grass Creek watersheds.  Impacts during storm events could include debris flows, flooding and road washout at creek crossings.  Homeowners within and downstream of recently burned areas are always advised to monitor National Weather Service advisories, direct or at:  https://www.weather.gov/byz/ and to have an emergency response kit of extra clothes, food and water in the event that they need to evacuate quickly.

For private landowners, the USDA Natural Resources Conservation Service has resources available to help you manage risk and protect your property both before and after fire at www.mt.nrcs.usda.gov. You can also contact the Park County (406-946-3006) or Sweet Grass County (406-932-5160) USDA Service Centers for technical assistance in potential recovery activities.