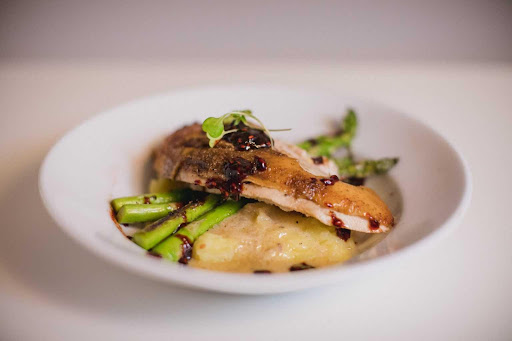 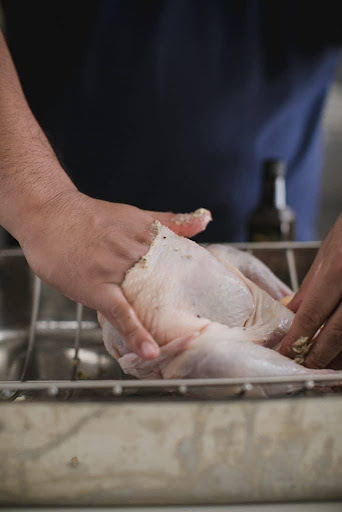 For a quick, delicious way to cook up and dig into that pheasant you’ve had lying around, look no further! Pheasant is a neutral white meat, similar to chicken, so you can spice it up any way you like. With a delicious fatty skin, similar to that of a goose or duck. This method of cooking keeps the pheasant whole and intact, under dry heat. The fat to muscle ratio is fattier than a chicken, but leaner like a turkey. It’s not likely that it will dry out the way turkey does, but there’s some special preparation to make sure you maintain the juiciness. The very first step, however, is to get all the guts out of your pheasant!!

Brining is basically “pre-salting” the meat, and letting it rest before cooking. Through the process of osmosis and diffusion that you catalyze with dry brining, your delicious pheasant meat won’t wring out all of its moisture in the process of cooking. Using 1 tablespoon of kosher salt mixed with 2 tablespoons of melted butter, and whatever other seasoning you want to add, and equally distribute across the surface of the meat. If you have liquid smoke, this makes a delicious addition, but not entirely necessary. After seasoning, chill for over 2 days in the fridge, and you may begin to cook!

YOU CAN TAKE THE HEAT 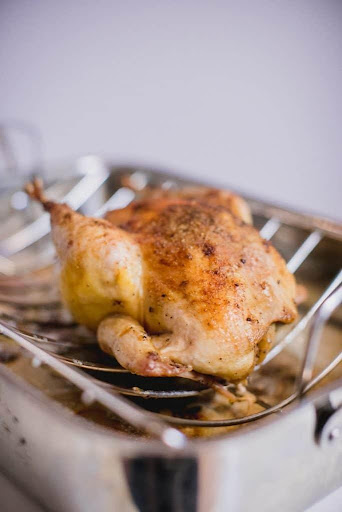 In order to maximize the effect of the brining and get the perfect balance of crispy skin and juicy insides, you’ll wanna start the pheasant in high heat. Preheat your oven to 450* and don’t put the pheasant in until the oven reaches that heat. Stick your thermometer into the thickest part of the pheasant thigh and set to 150*. Keep it at 450* for 10-15, or until the skin is golden/brown. Once the skin is brown and crispy, slowly turn it down so the juices aren’t forced out of the pheasant. Reduce to 325* and cook for about another hour, or until that thermometer reads 150*.

Let your pheasant friend rest for 15 min before serving!

Thank you to our friends at Beginner Food for this quick and easy recipe! Below we have linked their original recipe, as well as their bullet points for a summary of this recipe.