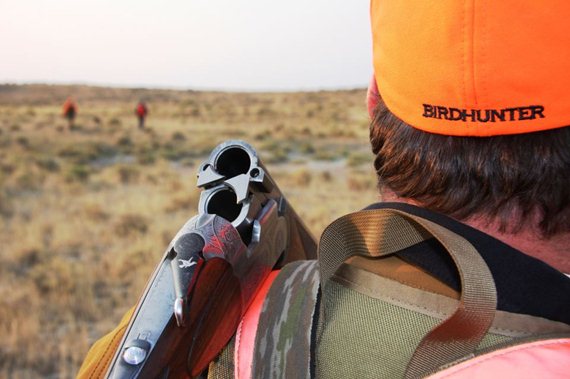 STACK YOUR SHOTS!!!
By Montana Grant

Shotguns deliver a pattern of pellets toward a target. If you don’t believe me, shoot at a sheet of cardboard. Make a specific bull’s eye and see how your guns patterns. Change distances and watch how your pattern increases. You may be surprised. The size of your pattern is also determined by chokes, range, powder charge, shell size, and BB sizes. All these factors help you become a better and smarter marksman. 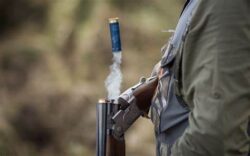 Wing shooting is tough. The thrill of a flushing gamebirds is why we do it. The adrenaline, excitement, and focus required all must happen in mere moments. If just one thing goes wrong, you miss. Smart hunters try to stack the odds in their favor.

Shotguns come in gauges. Most hunters use 12 ga., 16, ga., 20, ga. And others, as their hunting weapons. The larger the gauge, the bigger the load, and size of the shell. Each modern shotgun comes in a 2 ½ inch or 3-inch shell size. A 10-gauge shotgun is the largest shotgun carried in the field.

Each shell can contain a different powder load, with a different shot size. Different powders can mean a faster load. Most hunters tend to use the biggest and most powerful load than can find. Laws determine how many shells you can load, what the shot is made of, and what size shot you can use.

Shot can be made of lead, steel, bismuth, tungsten, and other metals. You can also change the type of wad cup that holds the shot in place. A wad with a post in the center, or a posted cap that fits down into the top of a filled shot cup, is called a spreader wad, for close in shooting.

Spreader wads create a wider pattern at close range. One target that gave me a fit, when shooting sporting clays, was the bouncing rabbit clay. The spreader wad took care of that.

Your shotgun also has a barrel that is “Choked”. This means that the tightness of your final inches of your barrel changes in diameter. Tighter is smaller, and wider is larger. Hunters used to add a poly choke to the end of their shotguns to allow for a quick field adjustment. You could also buy replaceable barrels to swap out for what game you are hunting. Today’s guns come with screw in chokes that can be changed using a tool. Choke sizes start at “Skeet” and squeeze smaller to become a “full” choke.

Skeet chokes allow a larger pattern at closer range, which can be helpful on a Skeet field. A full choke keeps the pattern tighter, further, which may benefit a shooter on a Trap field. This would relate to hunting quail at close range and geese at long ranges.

BB’s can also come in varying shapes, coatings, and materials. Waterfowl hunting requires non-lead shot. This means that the wad/ cup changes, the size changes, and the shape changes. Steel shot does not change its shape when fired. It also can damage the inner barrel of some shotguns. Hence the reason for stronger and thicker cups. All the shell’s components take up space which will change the amount of BB’s that the shell can hold. Therefore, shells have become longer.

Shotguns are pointed not aimed. It is true that you can shoot slugs in your shotgun, for deer. Newer rifled shotgun barrels can accurately place a sabotted bullet in a pie plate at 300 yards or more. This is fodder for another article. For this article, let’s stay focused on upland bird hunting, which is just around the corner.

If you aim at a flying bird, where it is, you will miss. You need to swing in front of the bird to hit it where it is going to be. In WW2 the best air to air gunners were boys from the Midwest that hunted upland birds. They knew to put their patterns in front of the moving targets.

Let’s look at a flushing rooster. Pheasants never fly where, or when, you want them. Since you must also only shoot males, or Cocks, you need to make an instant identification. If they cackle that helps but light conditions, immature birds, and other factors can make this identification more difficult.

You also need to make an instant “Safety Assessment” before taking a shot, all while mounting the gun, switching off the safety, and knowing where the dog is. Therefore it is important for hunters to wear Safety Hunters Orange hats and vests.

Many hunters love having a dog point the location of a hiding bird. This should allow more time to get ready. It doesn’t. In some ways it escalates how exciting the flush is. Then you need to complete your pre-shot checklist, before pulling the trigger, all while being surprised, excited, and thrilled. 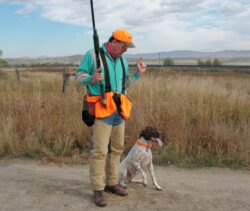 The first shot needs to be safe and accurate. If you miss, the follow up shots become tougher, as the range and lead grows, excitement escalates, and missing becomes more likely.

I practice shotgun shooting using a European Mount style. This means the gun is held in a carry position until I call for a skeet, trap, or sporting clay target. This forces, and trains me to always mount the gun quickly and perfectly. Muscle memory takes over allowing me to focus on the rest of my shot.

Many outstanding Skeet and Trap shooters are terrible field shots. Sporting Clay shooters tend to do better. Everything changes at the excitement of the shooting moment. A cackling, flapping, accelerating, beautiful, and thrilling rooster will rattle most shooters. The longer it takes them to go through their Pre-Shot checklist, the more complicated the shot becomes.

Bigger BB’s travel further and tend to hold a tighter pattern at range. You can also Buffer your shells, to keep the pattern tighter. Silicon sand and other granular compounds are loaded with the BBs to allow for this. I use these loads to increase my range for turkeys. My goal is a close in, aimed shot at the head of the Tom. I don’t want to ruin the meat and blow up the bird. My shots are normally called in to close ranges under 50 yards. An aimed full choke, with #4 BB’s, and buffered shell, will do just that.

Here’s how I STACK my shells and gun for success. I shot an old school 12-gauge Model 37 Ithaca pump shotgun. The shells I use are 2 ¾ inches long. I reload my shells and use 3 different shells when afield. Since I am hunting with a German Shorthaired Pointer, my shots tend to be closer, within 30 yards. Jag hunts close and holds point perfectly.

When we flush the bird together, I first look to see, or hear, if the pheasant is a cock. Prior to the flush, I have scanned the area to make sure of my field of fire and where other hunters and dogs are located.

I train my hunters to call out their targets. If it is a Rooster, they yell “Cock”. If they are not sure they yell “Bird”. If there is a safety issue they yell, “NO!!!”

My first shot will be close, so I use a 7 ½ shot size with 1 ½ ounces of shot. This means a lot of small pellets in the wide pattern. My next shell contains #6 shot. Slightly heavier and larger for a bit longer range and tighter pattern. My third shell is a #5 shot. If I have missed the first 2 shots, the final shot will be even further. Each shell is a different color, so if I need to reload, I can quickly see my shell differences. 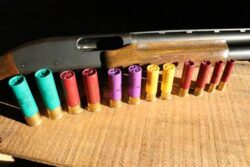 If I am shooting an Over and Under shotgun, I can load 2 shells in 2 different choked barrels. For pheasants, I shoot the bottom barrel first, in Skeet or improved cylinder sized choke and my 7 ½ shott shell. The back up shot is in a modified choke barrel, and size 6 shot which allows for a longer range.

Each shot Stacks the odds for success. The first shot is for when the bird is close, and I am excited. The second shot allows for a second nearby flush or if I miss the first. The third shot ends up as a Hail Mary shell designed for a denser pattern and longer range.

No one said this would be easy!