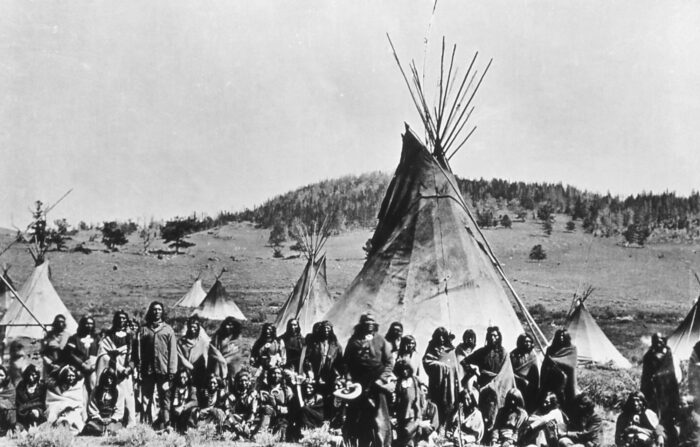 The recent tourist crowds in Yellowstone Park are nothing new. It is true that over a million visitors a month have visited the park the past few years. Ironically, they rarely spend more than 48 hours in the park. Most simply drive through, take in the key highlights, and leave for the next stop on their vacation.

Human visitations to the Yellowstone Park area go back 11,000 years. Archaeological evidence, ancient trails, objects, and other physical evidence supports the oral history of the native peoples. Intermountain pottery wear is common in these locations. Most of the campsites are along the Yellowstone River.

There were no Europeans visiting the park until the early 1800’s. Osborne Russell visited the area in the 1830’s. The first organized expedition was in 1870. Yellowstone formally became a park in 1872. The Army protected and managed the area from 1886-1918. The first autos drove through the park in 1915.

Over 27 indigenous tribes frequented the Yellowstone area. The oldest artifact was found near Gardiner, MT. at the northern entrance. The obsidian spear point was found near Mammoth and Buffalo bones. Atlatls were the weapon of choice at this time. Bows and arrows took their place about 3,000 years ago.

Most of the tribes visited the park in search of resources. Lodge pole pines furnished travois and teepee poles. Minerals, obsidian, food, plants and herbs, fish, and trading were all part of their visits. The Fishing Bridge area was a popular rendezvous site.

There have been 1,850 archaeological dig sites performed in the park. Less than 3% of the park has been surveyed. These sites have been mostly summer campsites. Firepits contained charcoal that goes back thousands of years. There is much archaeological work to be done.

The Tukudika Tribe may be the best-known resident of the park. They were also known as the “Sheep eaters”, because of their preference to eat Bighorn sheep. Their main camps were in the northern end of the park. Old villages, corrals, and other evidence supports their history. Evidence shows that Bighorn sheep and buffalo were kept in corrals for food. Sheep eaters never used horses. They preferred dogs to pull sleds and travois. They moved with the migrating sheep herds. Sheep eaters would soak Bighorn horns in hot springs to make them pliable. They were then made into strong bows. These bows and high-quality obsidian tipped areas were a major trade item with other tribes. Smallpox was the likely demise of their population.

All tribes enjoyed extensive trips into the Yellowstone area. Here they made spears, arrows, and tools needed for the Buffalo hunts that were their next destination. Yellowstone is surrounded by prime Buffalo habitat, which was the Indians major one stop shop.

The Crow tribe spent most of their time east of the park. Evidence of Kiowa peoples can be found from 1400-1700. Ancestors of the Blackfeet, Cayuse, Coer d’alene ne, Shoshone, and Perce, along with others showed that the park was a destination to many tribes. Stronger tribes-controlled access and trade.

It was not until the 1700’s that horses showed up in the area. The Sioux and Crow tribes used horses in the area 1,500-1,700 years ago. These tribes were often at war against one another.

The Nez Perce tribe, in August 1877, led by Chief Joseph, travelled through the park while being chased by the U.S. Army. Tourists were in the park at the time, as the tribe passed through the area known as Nez Perce Creek, along the Firehole River. The tourists shared food and clothing with the native peoples as they fled. Some prospectors and other groups had hostile outcomes.

Yellowstone Park is an amazing place. People visit the park to see nature in its purist form. At some point, we may need to add regulations to protect this wild and wonderful treasure. Huge buses and RV’s may need to stay outside the park. The roads and trails are still small. Respect for wild animals needs to be enforced. Crowds need to be controlled.

Yellowstone has seen trouble with crowds, tribes, and catastrophe for centuries. Hopefully, humans will manage to find ways to keep this beautiful destination intact and conserved.