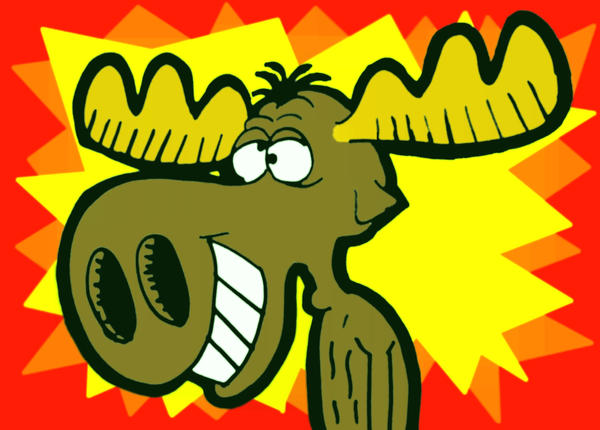 BULLWINKLE on the LOOSE!!!
By Montana Grant

It seems that Bozeman is not just a destination for tourists and city fat cats. Apparently, moose also enjoy visiting the growing Gallatin County town.

On Nov. 11, a bull moose was seen shopping along 19th Avenue near main street Bozeman. The Hyalite Mountains are only a few miles away and the moose was on the move.

Traffic, homeowners, and spectators herded to see Bullwinkle on parade. He was safely navigating the traffic and people when the MTFWP arrived. He must have walked right by their office just a few blocks south on 19th Ave.

Its not uncommon to see wild critters marching around town. Black bears, mountain lions, elk, deer, and other smaller mammals pass through the urban center. Most follow the watersheds, but Bullwinkle seemed intent on visiting the mall.

Fearing an unsafe encounter, the FWP agents acted. Moose can cause deadly harm to humans and pets. Even cars and trucks can be impacted by an 800 lb. incursion. A tranquilizer dart was shot into the bull’s butt, and he finally went down a few blocks away, near a Subway sandwich shop.

It took 8 strong officers to roll the drowsy bull into a large plastic sled. He was then slid to the back of a truck where he was loaded. No gifts for Rocky were located.

Bullwinkle was taken back into the nearby mountains where he could revive and return to his more private domain.

“Watch me pull a rabbit out of my hat!