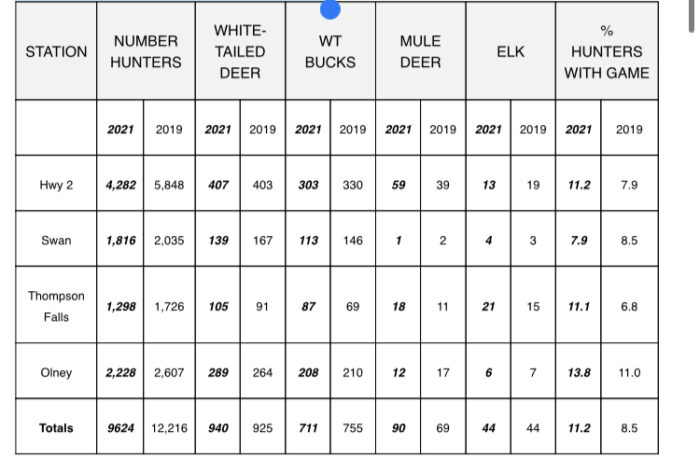 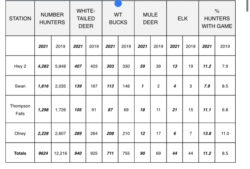 Despite unseasonably warmer conditions, the overall big game harvest remained higher than recent years in northwest Montana, according to preliminary check station results. The four stations in northwest Montana recorded 9,624 hunters, 940 white-tailed deer, including 711 bucks, as well as 90 mule deer and 44 elk. The percentage of hunters with game at the four check stations was 11.2 percent, compared to 8.5 percent in 2019.

“Our check stations saw a lot of 2-to-3-year-old bucks this year and that was to be expected following back-to-back mild winters,” Montana Fish, Wildlife & Parks Regional Wildlife Manager Neil Anderson said. “We also saw an increase in the number of mule deer bucks harvested overall.”

Check stations were open on weekends during general hunting season and only sampled a small portion of hunter participation and harvests across the region. They help biologists track monitoring trends and collect information on wildlife age, health, and other observations from the field. Telephone surveys, conducted over the upcoming winter months with hunters, will gather definitive harvest data and information.

Sportsmen should be aware that the biennial season setting process is underway this year.

Hunting season structures and hunting district boundaries are adopted for most game species every other year. In late September, FWP released potential changes to hunting regulations for the 2022 and 2023 seasons and solicited public comment for 30 days. FWP biologists and other staff sorted through the feedback and developed proposals for all game species for the Montana Fish and Wildlife Commission to consider at its meeting on Dec. 14.

Following the Dec. 14 meeting, a second public comment opportunity will begin on the commission-approved proposals for all hunting regulations for the 2022 and 2023 seasons. This public comment period will also include regional FWP Citizen Advisory Council meetings. In northwest Montana, FWP will host a public meeting with its CAC on Jan. 3 at its office in Kalispell and online through Zoom.

The commission will adopt final hunting regulations at its meeting in early February.

Hunters who harvested deer, elk or moose this season have until 5 p.m., Dec. 3 to bring the animal’s head to the FWP office in Kalispell for chronic wasting disease sampling. Testing for CWD is voluntary throughout the state. FWP is assisting hunters with sample collection and submission at the Region 1 office in Kalispell, Monday-Friday from 8 a.m. to 5 p.m. FWP will cover the cost of testing hunter-harvested animals for CWD.

Hunters who want their animal sampled should leave 2 to 4 inches of the neck below the low jawbone and base of the skull to ensure lymph nodes are present and not inadvertently left with the carcass. Samples cannot be collected from frozen heads.

To help prevent the spread of CWD, all carcasses, including the head and spinal column, must be disposed of in a class II landfill after butchering and processing. Dumping carcasses is illegal, unethical and can spread diseases, including chronic wasting disease. This requirement applies to all deer, elk, and moose carcasses harvested by hunters or as vehicle-killed salvage.