MISSOULA –Big game hunting season hits its midway mark this week, and hunter check station numbers in west-central Montana show an elk harvest just a bit behind last season and a deer harvest slightly above. Hunter trips through the stations remain up from last year.

The number of hunter trips through the Darby, Bonner and Anaconda check stations totaled 4,834 for the first two weekends of the season, up from 3,978 in the 2020 season. Those hunters checked enough deer to put harvest above last year’s mid-point, while the running total of 119 elk is just slightly behind the 124 recorded last season at the point.

In the southern part of the region, Montana Fish, Wildlife & Parks staff checked 2,106 hunters at the Darby check station in the first three weekends of the season. These hunters reported 79 elk, which is 23 percent lower than the five-year average, while the harvest of 26 mule deer is up 44 percent. The harvest of 25 white-tailed deer is on track with last year and the five-year average.

“It’s about what you would expect in a hunting season without snow,” said Mike Thompson, FWP Missoula-based wildlife manager. “If you find your elk, the hunting is great, but otherwise you don’t see tracks or sign, which makes hunting tough.”

Hunters must stop at all check stations that they pass, even if they have not harvested any animals. The general big game season runs through Sunday, Nov. 28. 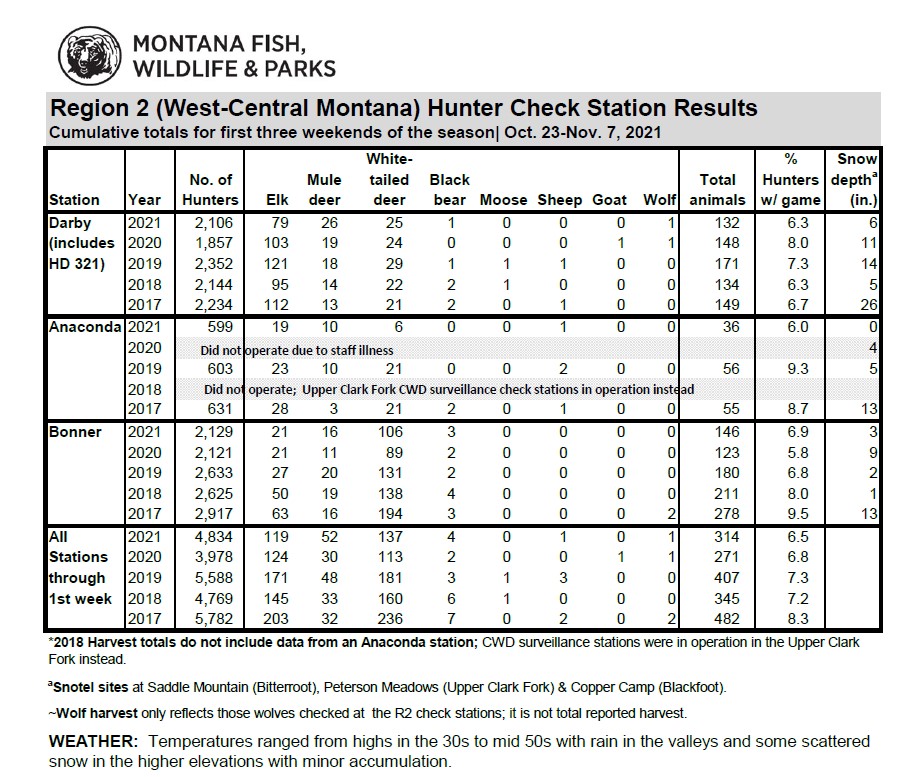