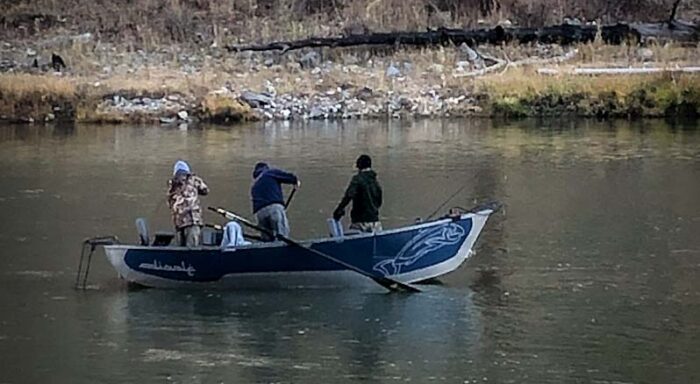 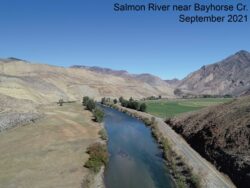 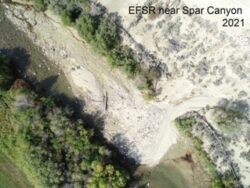 River conditions improved slightly over the weekend and by Sunday, the river had approximately 3 feet of visibility with water temperatures in the mid-40s. As of Monday, November 1st, the Salmon River is flowing at 1,180 cfs through the town of Salmon, ID which is 88% of average for today’s date. As mentioned in last week’s report, the river’s poor visibility is primarily due to mud slides that happened around the East Fork Salmon River back in August. When these slides occurred the Salmon River was flowing near 50% of average and now that river flows have increased, the river is slowly transporting more of the sediment downstream. One of the pictures attached to this email shows the accumulation of sediment in the river upstream of Bayhorse Cr. in September before flows began to increase, and two other pictures show the same location on the East Fork Salmon River in September 2020 compared to September 2021.

Over the weekend, five PIT-tagged steelhead were detected passing over the PIT tag array located upstream of Salmon, ID at Elevenmile, and in the past 30 days at total of 15 PIT-tagged steelhead have been detected at this site. Anglers can check for detections themselves by navigating to PTAGIS.org and selecting “Observations” which is located in the drop down menu under “Data”. A link to this webpage is also provided here. To select the Elevenmile site, scroll down and look for “USE – Upper Salmon River at rkm 437”. Once the site is selected, choose the desired time period and click on “Submit”. The results will show all the PIT tag detections made within the selected time period, but it is also possible to filter the results by selecting a species name under “Tags per Species”.