Fungi for the Fun Guy: Montana Mushrooms
By Krawdaddy Jones

Foraging mushrooms is a hobby increasingly popular amongst generations across the board. While you’ll have the most luck in many Oregon counties, Montana has a good share of shrooms for you to peruse. Mind you, the mushrooms listed here are not of the psychedelic type. These fungi are just delicious, nutritious  treats. Happy foraging! 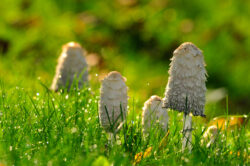 Also known as Coprinus comatus, or even “lawyers wig,” Shaggy Manes are often found growing on lawns, gravel roads or waste areas. The fruit bodies are white cylinders at first,emerging from the ground as they grow in an area. Bell shaped caps follow the white fruit of the body, and are covered in scales. If you’re looking for a tasty mushroom snack, make sure you catch these little beauties while they’re still young. As they age, the cap will become more bell like, and secrete a sticking black ink-like goo from the edges. This is the “self destruct” mode. Shaggy Manes are best consumed fresh from harvest, unless you dry them. Follow this Forager Chef parmesan crusted Shaggy Manes recipe for a delicious way to prepare your mushrooms. 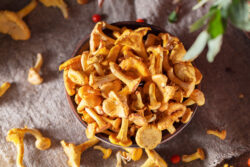 Within the genera Cantharellus, Craterellus, Gomphus, and Polyozellus, Chanterelles are some of the most popular mushrooms for foraging and eating. Ranging in colors from orange, yellow or white, and typically meaty and funnel-shaped. Forked folds run underneath, and they can emit a fruity aroma similar to that of apricots. These golden morsels are most commonly found in mountainous birch forests, and coniferous forests in clusters. Cooking the chanterelles whole after immediately washing them (to ensure the dirt is not dried onto the mushrooms before you can wash them) is a great way to prepare. Follow Forager Chef’s tips and tricks by clicking here.

As one of the easiest mushrooms to hunt, Hypomyces lactifluorum, or Lobster Mushrooms are a gorgeous bright orange morsel. They’re found along trails in hardwood forests, typically alongside where milk cap mushrooms grow. They’re scattered, but do grow in proximity to each other, so if you find one the likelihood of there being more is high. These are a midsummer shroom and can be around through September. Further to the Pacific Northwest, the season extends longer into the fall. These mushrooms should be harvested heavy, and be about the feel of a paperweight. If they’re fishy smelling or styrofoamy, leave them alone: they’re old. For more harvesting tips and a recipe, check out Forager Chef’s tips and tricks. 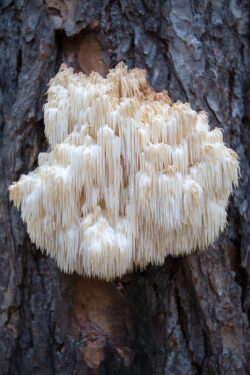 All known members of mushrooms in the Hericium genus remain edible, and Icicle Mushrooms are easily identifiable in the wilderness. Also known as Hericium erinaceus, they resemble hanging icicles, and are typically found in dead trees, but can also be on living trees. Common in gourmet cooking, these morsels are best harvested young, with a flavor comparable to lobster. These mushrooms can also be called “Lion’s Mane,” and have many health benefits including brain boosting. It’s important to cook this special mushroom, don’t eat them raw. Tyrant Farms has some amazing info on these mushrooms, as well as a delicious Lion’s Mane Crab Cake recipe! 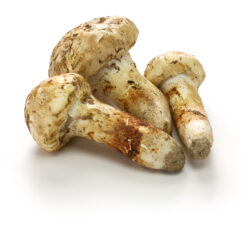 Also known as Tricholoma magnivelare, White Matsutake is a September sprouting shroom. The flesh of this mushroom is white and firm, and is a ceremonial mushroom in Japan to celebrate the autumnal season. These mushrooms might take a bit of a trek to find, as they are most commonly found under eastern hemlock in Maine, and often hide in plainsight. White Matsutakes, however, can be found among hemlock and white pines in Montana, and you’ll smell something spicy before you see them. They are best harvested young, before the caps are unopened. Make sure you get the whole fruit body as well. These mushrooms are a bit unpredictable in terms of access as well. For more tips, anecdotes and edible preparation check out Mushroom Collecting by clicking here.

I hope you’re as fascinated with mushrooms as I’ve been recently. More information, and my sources were FreshCap, Wikipedia, Forager chef, and MushroomCollecting.com. Click any of their titles to get to their sites. Happy foraging.