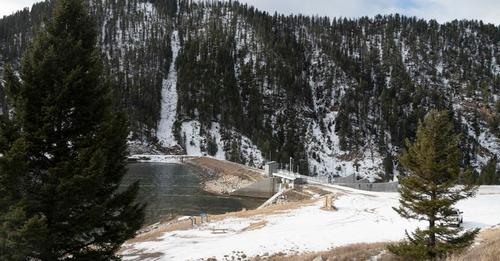 The Hegben Dam has been around for over a century. This dam was built to create a lake along the Madison River. Nearby West Yellowstone is the closest town and enjoys the wild open trout filled paradise.

Northwestern Energy owns and operates the facility under rules and guidelines set up and agreed to with the state of Montana. The law states that no water drops of over 67% in 24 hours are allowed. A minimum flow of 150 CFS is also a mandate. Normal flows at this time of the year are around 900CFS.

A few weeks ago, the dam’s coupler busted. It was less than a few years old and was installed during the last dam repair. When the coupler broke, the flow dropped from normal to 177 CFS. You can see the change on the water flow charts. Thanks to a century old metal and machine shop in Butte, a new coupler was forged and delivered.  For over 24 hours, the upper 50 miles of the Madison River started to dry up.

Over 50 miles of river were immediately impacted. Fish populations were stranded or compressed into smaller flows. Fingerlings were flopping along the dewatered gravel beds. Recent spawning nests were also high and dry, then frozen overnight. The remaining water temperature dropped nearly 10 degrees.

Volunteers rushed to the rescue of fish. Still, the damage was done.

Who is responsible for this fishery damage that will take years to recover? No electricity is made at the dam. The Ennis dam, downstream, does generate power. It is serviced by the Ennis Lake and Madison River. Hegben Lake is 2 lakes upstream. Quake lake sits a few miles downstream of Hegben Dam.

This was the second dam failure in 10 years. The contract does have fines and clauses to address responsibility. Some of these fines are a whopping $20,000 or so. Even if several fines are imposed, somehow, they will not cover the fiscal damage done.

It’s ironic that a massive earthquake in the 1950’s and natural earthquakes year around have not taken out this dam. Half of a mountain fell off and formed Quake Lake just downstream, but Hegben Dam stands still. It only takes a few manmade parts, or mistakes, to break the dam.

Currently the Madison River, below the dam, is not closed. It is recommended by the FWP that fishermen and boaters give the river a 60–90-day moratorium. There are still some fishermen pounding these world class waters. Hopefully the coming cold Winter will keep them home or on the ski slopes.

This dammed river is now changing. Excessive fishing and boating pressure have already become a concern. The swarms of fair-weather fishermen, guides, visitors, and drifters are also a problem. Guides, anglers, boaters, shuttlers, and users are all in disagreement on what is best. The State and local nonprofits are struggling to fix this problem. The Madison was also just recovering from Whirling’s Disease just a decade or so ago.

As the vested interests wrestle over their needs, fines are imposed, policies are addressed, fish grow up, and habitats change, maybe some positive and healthy change will emerge from this watershed moment.

This Dam problem needs to get fixed sooner than later!